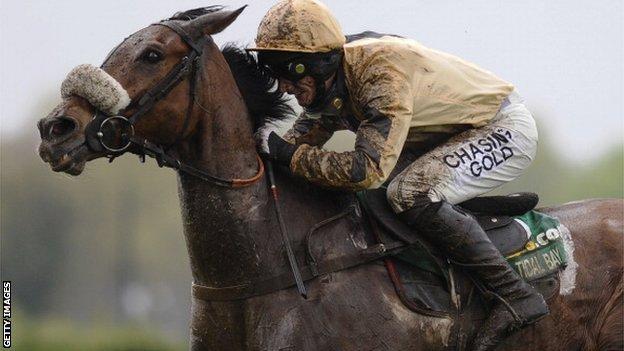 Tidal Bay has been allotted top weight of 11st 10lb in the Grand National at Aintree on 6 April.

The Paul Nicholls-trained 12-year-old won the Lexus Chase at Leopardstown earlier this month and was allocated a British Horseracing Authority mark of 171.

My only worry is Seabass and Colbert Station arrive at Liverpool in good form, healthy and well

But Grand National handicapper Phil Smith, who is allowed discretion in weighting handicaps, rated him at 162.

The last top-weighted horse to win the Grand National was Red Rum in 1974.

Nicholls won the National for the first time last year with the now-retired Neptune Collonges.

The trainer has three other interesting contenders - Becher Chase runner-up Join Together (10st 12lb), and a pair part-owned by Sir Alex Ferguson in What A Friend (11st 5lb) and Harry The Viking (10st 2lb).

Andrea and Graham Wylie, who own Tidal Bay, also have leading contenders On His Own (10st 10lb) and Prince De Beauchene (11st 3lb) in their stable - both of whom are trained by Irishman Willie Mullins.

Seabass carried 4lb less when third 12 months ago, and Walsh, speaking before seeing the full list of weights, said: "I don't know how Seabass can get over 11st this year if Tidal Bay is rated 171 and my horse is rated 154."

A decade of National winners

Seabass returned to the racecourse for the first time since his gallant Aintree effort to run a staying-on second over two miles in a hurdle race at Fairyhouse last week.

Walsh said: "Seabass will run somewhere in the next three weeks to a month. There is just over seven weeks to Liverpool so I would like to get a run into him."

Walsh, who won the National in 2000 with Papillon, said of Colbert Station: "Like Seabass, Colbert Station will possibly have one more run. I have no idea where he will go at this stage as he only recently ran."

Colbert Station won a handicap chase at Leopardstown over Christmas and followed up over hurdles at Punchestown, ridden on both occasions by Tony McCoy.

Seabass was ridden by Walsh's daughter Katie last year, when she finished the highest placed lady rider ever in the National in third.

Walsh has not revealed who he plans to ride his mounts this year, saying: "My only worry is the two horses arrive at Liverpool in good form, healthy and well.

Seabass, On His Own and Prince De Beauchene head the market as 14-1 co-favourites.