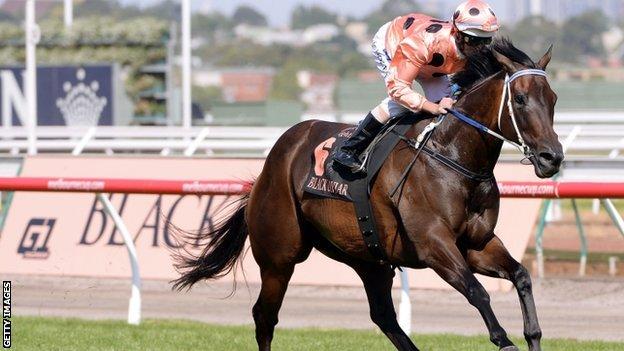 Black Caviar broke the Flemington track record as she returned from eight months off to record her 23rd win.

The unbeaten Australian mare had been on the brink of retirement after tearing a quadriceps muscle while running at Royal Ascot last June.

But she was a convincing winner of a race named in her honour - the Black Caviar Lightning Stakes - leading the field by two lengths.

"I am just so proud of her and my team," trainer Peter Moody said.

Black Caviar had been nursed back to health by Moody and his team using a combination of laser therapy treatment and exercising in water.

The mare won the Diamond Jubilee Stakes at Royal Ascot last summer on her first race outside her homeland, but came back in style at Melbourne, defeating Moment Of Change by two-and-a-half lengths.

"We were on a hiding to nothing by bringing her back," Moody continued.

"The job was done and we thought it was over, but to come back and do that and run a record, I'm lost for words."

Jockey Luke Nolen added: "She didn't tow up like she can through the early and middle stages.

"But she towed me into it nicely and I gave her a squeeze because I didn't want to get complacent with win 23.

"I had a look at the time when I rolled back in and I thought we might have gone a bit quicker than how it felt.

"She continues to amaze me."