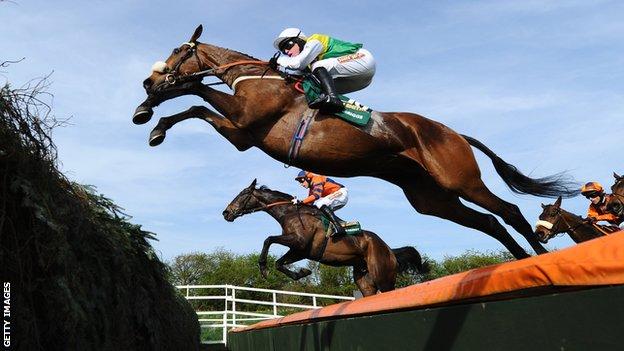 The winner, ridden by Davy Russell for trainer Gordon Elliott, made all the running and is now about a 20-1 chance for the National at Aintree on 6 April.

Meanwhile, Opening Batsman (12-1) edged out his rivals to land the Racing Plus Chase as trainer Harry Fry scored a success over old boss Paul Nicholls.

Nicholls had to settle for second at Kempton with Rolling Aces.

Favourite Wyck Hill was 11th, while two-time winner Nacarat finished last of the 12 runners in what was likely to have been his final race.

Roi Du Mee beat the Willie Mullins runner-up by two lengths at Fairyhouse, but the top Irish trainer will be satisfied with their runs and celebrated a new record at the meeting.

Mullins, who won the National with Papillon in 2000 and Hedgehunter five years later, broke Aidan O'Brien's 1995-6 mark of Irish National Hunt winners in a season with an early double that put him on 156 mark. for the campaign.

"The wet summer we had suited us, a lot of our horses are bigger, heavier types and need a good cut in the ground, which we got all summer," said Carlow-based Mullins.

"The horses are in form and hopefully they can stay like that for another couple of weeks."

Elliott is also looking forward to the next few weeks, with the Cheltenham Festival in March and April's Grand National meeting.

"I'm not sure what we'll do but he's in the Ryanair Chase [at Cheltenham] and in the National," he said of Roi du Mee. "We hadn't really looked beyond today and we'll see how he comes out of this."

Seabass was cut to 10-1 joint favourite for the National, alongside Prince De Beauchene, after another nice run under Katie Walsh for her trainer father Ted.

Katie was third in the Aintree marathon last year on the horse, and could bid once again to become the first female jockey to win the famous race.

Her brother Ruby is likely to have the choice of Price du Beauchene and stablemate On His Own, who are both owned by Graham Wylie.

After racing at Kempton, the Cheltenham Festival's all-time leading trainer Nicky Henderson galloped some of his leading prospects for this year.

"Bobs Worth was the one we were trying to get the work into most, [jockey] Barry [Geraghty] said you wouldn't want to leave him alone and he will work again next weekend, but I have to say he worked very well," said the Lambourn trainer.

"We let Long Run lob along, he has been quite lazy and we are thinking about using cheekpieces at Cheltenham. Binocular is really well and he found it very easy as he was working with three-mile chasers."