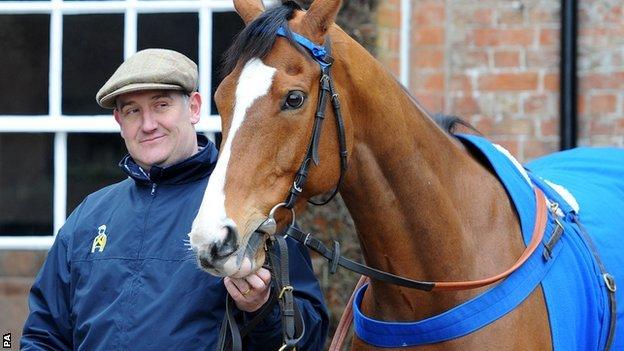 It is the Cheltenham Festival clash that is perhaps the most hotly-anticipated this year.

In the Racing Post Arkle Chase, Simonsig, unbeaten in his two steeplechases to date, faces Overturn, a star of the Flat and hurdles, now chasing and the winner of three from three.

With the Supreme Novices' Hurdle and Champion Hurdle on the same afternoon, those that insist the first of the four Festival days is the superior one have more ammunition.

Betting-wise, the exciting grey Simonsig, trained by Nicky Henderson, is odds-on favourite to inflict defeat on the front-running Overturn, a bay, being prepared by Donald McCain.

The Simonsig camp believe their champion, a novices' hurdle winner at the Festival 12 months ago, will allow his rival to tear off in front before pouncing on him late.

If he never wins again, he's done us proud, but I would love him to have his big day jumping [fences]

Overturn's supporters, who have cheered the nine-year-old to victory in Flat racing's Northumberland Plate and seen him finish a clear second in the Champion Hurdle (2012), are adamant Simonsig will struggle to catch up.

It is the sort of showdown that is meat and drink to jump racing's showpiece event.

Asked whether his horse's catch-me-if-you-can style might set things up for the favourite, the genial McCain's tone takes on a steely edge, he said: "His way of racing will make it very difficult for Simonsig. Simonsig is a grand horse, very impressive, but he's not finished second in a Champion Hurdle. He's not been tested."

Overturn is one of 140 or so horses that McCain, son of the late, legendary Ginger, trains on the Cholmondeley Castle estate in rural Cheshire.

Having taken over the family training licence in 2006, McCain junior's first Festival runner, the following year, was a winner and five more have followed.

This season, the stable has sent out more winners than any other, and lies third in the prize-money judged championship, behind Paul Nicholls and Henderson.

Of all the good horses the McCains have guided over the years, none is going to surpass Red Rum, but Overturn clearly also scores very high.

"He comes out every day and makes you smile," said the trainer, himself smiling at the thought.

"He can't get enough of the job, and thrives on his racing.

"Everything has gone smoothly, he's got experience on a number of different tracks, and we're just looking forward to hopefully getting a bit of nice ground.

"If he never wins again, he's done us proud, but I would love him to have his big day jumping [fences]."

Peddlers Cross, back to hurdling after an ultimately disappointing time over fences, is said to be 'in good nick' as he is aimed at the World Hurdle.

During my visit, Super Duty (RSA Chase or Kim Muir Chase) looked the picture of health, while I can pass on a strikingly upbeat bulletin on Champion Hurdle hope Cinders And Ashes.

Of last year's Supreme Novices' Hurdle winner, beaten in two races in muddy conditions this season, McCain said: "He's very much decent ground horse, and I don't think he can be judged until he gets his ground, when you'll see a completely different horse.

"We've been second in the last two Champion Hurdles [with Overturn and Peddlers Cross] and what this horse has is different. He has more tactical speed and switches off and relaxes.

"He has a massive each-way chance."

With Cinders And Ashes and Overturn both raring to go, what odds on day one of the Cheltenham Festival being a massive one for Donald McCain?

BBC Sport's Frank Keogh is hosting a Cheltenham Festival preview on his Twitter account @honestfrank on Thursday from 1930-2130, where he will be joined by Cornelius Lysaght plus, a Gold Cup-winning trainer, former bookie, Irish tipster and two racing journalists of the year.

Cornelius Lysaght and the team will also preview the Cheltenham Festival and discuss other racing matters in a BBC Radio 5 live preview on Thursday from 2100-2230.