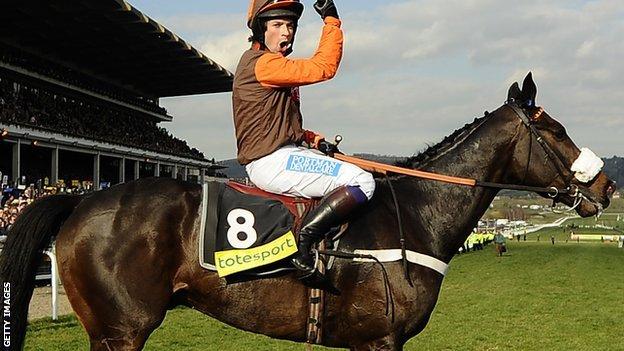 The 30-year-old, who some critics want replaced by a professional, says his partnership with the fourth favourite has improved over time.

"We understand each other better and 7-1 for a horse that has never been out of the first three is an attractive price," said Waley-Cohen.

"Lots of people can criticise - you don't have to agree with them."

Waley-Cohen, whose mount beat great steeplechasers Denman and Kauto Star two years ago, has also been third in a Gold Cup and landed the King George VI Chase twice with Long Run.

But, despite their successful association, some believe a professional with more experience should be on board the Nicky Henderson-trained horse.

The jockey was criticised when winning a second King George in December after Long Run made a mistake at the last fence but battled back to edge out Captain Chris.

"People will point to the fact he made a mistake in the last race and wasn't that tidy, but, if you take the race as a whole, his jumping has really improved and he has matured as a horse," said Waley-Cohen, who runs a dental business.

No horse other than Kauto Star has regained the Gold Cup having lost it but there is little likelihood of Long Run's owner Robert Waley-Cohen replacing his son on the horse.

While Sam may not boast the experience of professionals such as Ruby Walsh, Barry Geraghty and AP McCoy, he has been in the first three in all 12 races he has ridden the horse.

Long Run was the youngest Gold Cup winner since Mill House in 1963, but was beaten twice by Kauto Star last season before finishing third behind winner Synchronised when favourite for the big Cheltenham race.

"There is no reason why he couldn't get back to the level he achieved when he beat Denman and Kauto Star," said Waley-Cohen.

"It's a perfectly realistic aspiration, whether you can go on from that depends on the day. Does the ground suit, is the horse in the best form of his life?"

"What I look for is to see a horse that is consistent, that wants to go out there and run a good race and to me that epitomises Long Run as a horse who is all courage and loves his racing."

Long Run's stablemate Bobs Worth, who has won four races at Cheltenham and triumphed in the Hennessy Gold Cup last time out, heads the betting at about 3-1 ahead of Silviniaco Conti and Irish challenger Sir Des Champs.

Long Run lost to Silviniaco Conti in the Betfair Chase at Haydock in November, while Sir Des Champs won the Irish Hennessy.

"Bobs Worth's form is absolutely irrefutable, there is no question that he is rightly at the top of the market," said Waley-Cohen.

"Having said that, Paul Nicholls doesn't tend to overplay his hand and is very bullish about Silviniaco Conti and I thought Sir Des Champs in the Jewson Chase [Cheltenham 2012] was a sight to behold. I think it's a very high quality field this year."

Asked if he had £10 to put on one horse in the Gold Cup, Waley-Cohen replied; "I would back Long Run. I think he has a chance of winning it."

Meanwhile, he is aware of other priorities, with his wife Annabel expecting their first child in late March.

"It means you don't get too blinkered by the importance of the race as it reminds you there are more important things," he added.