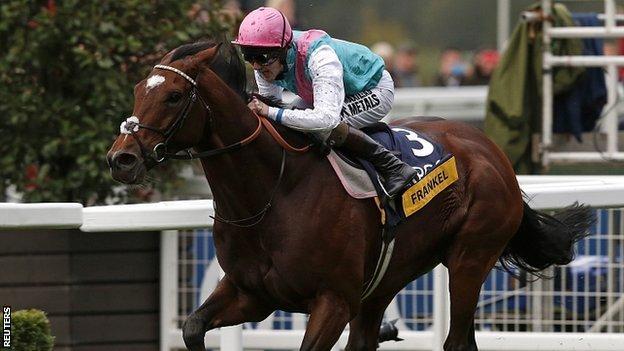 Frankel has proved his fertility with his first mare carrying a foal at Banstead Manor Stud in Newmarket.

The mare is Chrysanthemum, a dual Group Three winner who was third in a Group One race at the Curragh in 2011.

Frankel commands a fee of £125,000 for each mare who breeds with the stallion, on a no-foal, no-fee basis.

Bated Breath, also owned by Khalid Abdullah, has had his first mare tested in foal - Pretty Primo, a winning half-sister to Group One winner Wootton Bassett.

"Both horses are proving to be very professional and it is always good to get their first mare tested in foal," said stud general manager Philip Mitchell.

With an expected annual roster of 100 mares, Frankel is expected to generate more than £12m in his first year and well over £100m overall during his stud career, compared with nearly £3m in prize money he won as a racehorse.

Frankel, son of 2001 Epsom Derby winner Galileo and grandson of champion stallion Sadler's Wells, was retired from racing after winning the Champion Stakes at Ascot in October.