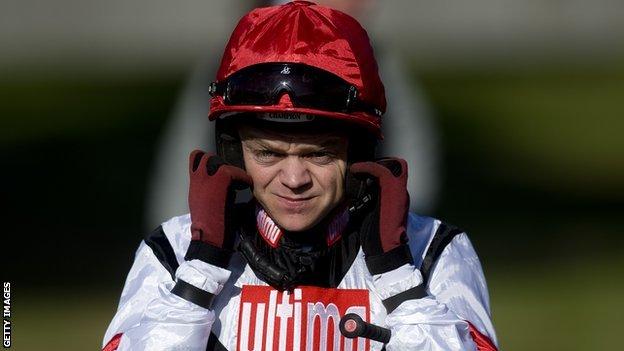 Leading jockey Robert Thornton is set to miss the Cheltenham Festival and the remainder of the jump racing season.

The 34-year-old, nicknamed 'Choc', said on Twitter: "Few tests yesterday, not great news looks like I'll be missing the rest of the season."

Thornton suffered a fall when riding Our Phylli Vera for his boss, trainer Alan King, at Southwell on Monday.

He was leading rider at the Festival in 2007 and won the Champion Hurdle a year later on Katchit.

"When I spoke to him last night I realised things were pretty bad," said King, who is based at Barbury Castle, near Wroughton, Wiltshire.

"After the fall we all thought he was just badly bruised, but the scan has obviously said otherwise.

"I'm not entirely sure what the injury is, I believe he's done something to his arm.

"We'll get by, but I just feel so sorry for Choc (Thornton). "We're all absolutely gutted for him