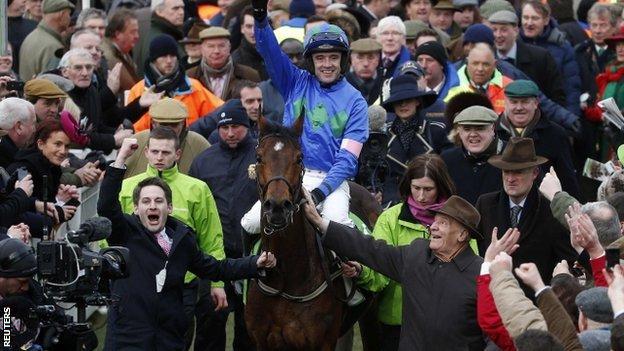 The 2011 winner looked to be struggling at one stage, but Walsh allowed him to recover and claim a stunning two-and-a-half-length win over defending champion Rock On Ruby.

"I'll be leaving the opening day of the Cheltenham Festival with just one word echoing in my ears.

'Rooobie, Rooobie' is the name they've been chanting all day after Ruby Walsh, at his brilliant, confident best, along with Willie Mullins, made history at the double.

What fabulous achievements by both, and by the two horses concerned, first Hurricane Fly and then Quevega.

No horse has regained a Champion Hurdle since 1975 for a good reason, namely that the competition is so fierce at that sort of level, and to take a Festival race for the fifth time, as Quevega did, is simply astonishing.

Theoretically, the next Quevega should be emerging but again she's seen off all-comers.

A magnificent day for all concerned at the start of what's tipped to be a magnificent week."

"He's a cracking little horse," said Walsh. "He showed another side to him today and that was guts."

Walsh and Mullins also combined to lead Quevega into the record books as the mare became only the second horse to win at the Cotswold course for the fifth successive year.

The 8-11 favourite powered past Sirene D'Ainay in a late surge to win the Mares' Handicap and move alongside Golden Miller who won five straight Gold Cups in the 1930s.

Walsh also produced one of his best ever rides at the meeting when winning the opening Supreme Novices' Hurdle on Champagne Fever (5-1).

Earlier, Simonsig won the Arkle Chase for Nicky Henderson, giving the Lambourn trainer his 47th career victory at the meeting.

Hurricane Fly had disappointed in third when favourite for a second win 12 months ago, but has bounced back in style this season and emulated Comedy of Errors in 1975 by claiming back the champion crown.

Rock On Ruby ran a fine race in second and looked a potential winner when the favourite slipped back, causing groans among the large Irish contingent in a 60,000 crowd.

But Walsh was shrewd enough to give the nine-year-old, known simply by fans as 'The Fly', a breather and his mount flew round the home turn and surged clear up the straight.

"He deserves to be a dual winner in the Champion Hurdle because horses like him are hard to find," he added.

"I can't say I was overly confident - from the word go he didn't travel as well as he can.

"He made a mistake or two, but he's as tough as nails. He pinged the last and I'm glad he got it back to show everyone he's a true champion hurdler."

It was yet another Ruby Tuesday for all-time Festival leading jockey Walsh, who stood at 36 career wins after the latest Champion Hurdle triumph.

Racing was delayed by 35 minutes to allow frost on the ground to thaw out, and Walsh wasted no time in setting about his task, judging the pace perfectly on Champagne Fever.

Walsh has also won the Gold Cup on Kauto Star in 2007 and 2009, the Queen Mother Champion Chase three times, including back-to-back wins on Master Minded in 2008 and 2009, and the last four World Hurdles on Big Buck's

Walsh gave the Mullins-trained horse a bold front-running ride and kept enough back to deny his rival and friend AP McCoy, on warm favourite My Tent Or Yours, up the demanding Cheltenham hill.

Simonsig secured the second consecutive win for a grey when landing the Arkle Trophy Chase.

However, he was forced to push the 8-15 favourite out to win by two-and-a-quarter lengths from 33-1 chance Baily Green.

Jockey Brendan Powell junior, whose father won the Grand National on Rhyme n Reason in 1988, demonstrated he could be a rider with a big future as he neatly guided the eight-year-old round.

Amateur Waley-Cohen, son of Cheltenham chairman Robert Waley-Cohen, urged Rajdhani Express (16-1) to victory by a neck from Ackertac in the day's final race.

Sam Waley-Cohen, who celebrated the birth of his first child, Max, on Sunday, will again partner Long Run in the Gold Cup in Friday, hoping for a repeat of the pair's 2011 victory in the Festival showpiece.

"They say good things come in threes, so fingers crossed," he said.

"I'm so pleased for Rajdhani Express. He jumped so beautifully - he just goes orbital and it's just the most incredible feeling.

"You come to Cheltenham and you don't dream you're going to win these races - it's magical."

Full results from the opening day of the Cheltenham Festival