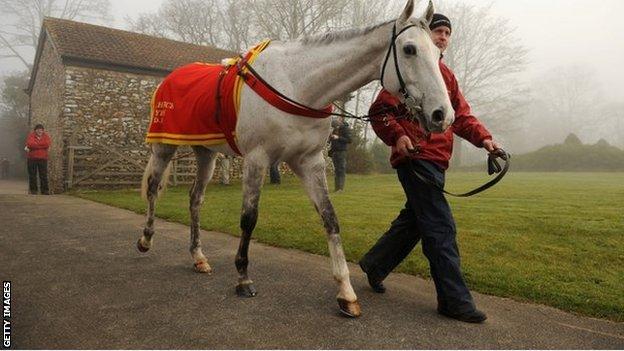 Grands Crus will miss the Cheltenham Festival and is being aimed at next month's Aintree's meeting instead.

On Thursday, the grey gelding's co-owner Roger Stanley said the horse would revert from steeplechasing to run in the World Hurdle.

Grands Crus was second to four-time winner Big Buck's in the 2011 race, before switching to fences.

Somerset trainer David Pipe said on Friday that the eight-year-old was "not 100%".

Meanwhile, champion trainer Paul Nicholls said Wonderful Charm, who has been considered for the Coral Cup, is likely to run in the World Hurdle - the feature race on Thursday 14 March, the third day of the Cheltenham Festival.

Quevega is also among 18 entries remaining in the race although Willie Mullins intends to let her bid for a fifth consecutive win in the mares' hurdle on Tuesday.