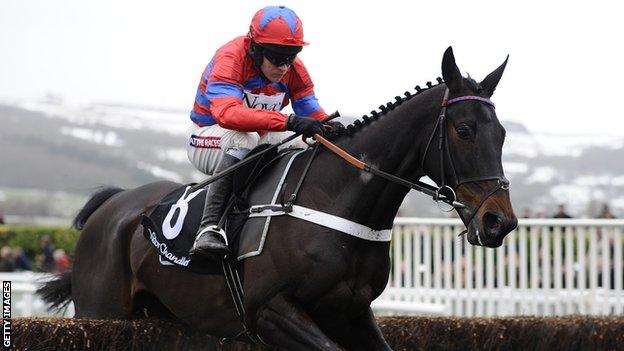 It is doubtful any other sport has a single event in the calendar that is quite as all-consuming as the Cheltenham Festival is to jump racing.

Pretty much from the moment that the last of the 237,000 who attended 2012's four-day spectacular departed their Cotswold 'Mecca', plans were being hatched for 2013.

Of course, practically every week sees a major jumping prize competed for across these islands, each with its own significance, but Cheltenham is where it's really at.

This time, a record 2,075 horses (including 599 Irish) were entered for 27 races worth an average of £141,000 - though to many the glory of a Festival winner is quite simply priceless.

Picking a winner in the most fiercely competitive horse races of the year is a popular quest too, and it's estimated that, even in these straitened times, £250m will be gambled.

So who will be the stars and which are the contests to look out for at this year's Festival? Here are my six potential highlights:

Even by the sky-high standards of jump jockeyship in Britain and Ireland over several decades, there has never before been so much quality on display.

Ruby Walsh is the most successful ever Festival jockey with 32 wins, including success in two Gold Cups on the legendary, but now retired, Kauto Star.

However, two other riders, AP McCoy and Barry Geraghty, are also masters of the kind of tactical guile, strength and coolness that success on the big Festival occasion demands.

With champion trainers Paul Nicholls and Willie Mullins both behind Walsh, owner JP McManus employing McCoy, and Geraghty number one choice for the star-studded Nicky Henderson string, the trio look likely to be the headline acts once again.

The principal rival to their dominance may be the talented Jason Maguire, rider of Overturn who will go up against Simonsig and Geraghty in a much-anticipated Arkle Chase clash.

Of the youngsters, 'rising star' is a label regularly attached to - in alphabetical order - Aidan Coleman, Nick Scholfield and Sam Twiston-Davies.

Battle of the Champion Hurdlers

Three former Champion Hurdle winners are due to contest the first-day feature, and their presence, along with some very worthy would-be champs, give this a vintage feel.

Defending his title is Rock On Ruby, representing Harry Fry, 26, Paul Nicholls's ex-assistant and without question the most upwardly mobile young jumps trainer in the country.

Twelve months ago, the race fell perfectly for the eight-year-old, then overseen by Fry as part of the Nicholls team, while things didn't really go right for 2011 winner Hurricane Fly, who finished third.

The vibes are strong for a repeat by Rock On Ruby, as they are around Irish-trained Hurricane Fly who has enjoyed the smoothest of build-ups, in contrast to last year.

No horse has regained the Champion Hurdle crown since the 1970s favourite Comedy Of Errors (1975), a stat that the 2010 winner Binocular, last year's fourth, is bidding to change.

Mud-loving Zarkandar, fifth behind Rock On Ruby, brings another blemish-free seasonal record to the party, but formbook students like Grandouet to beat him, despite missing a prep race.

That the 2012 Supreme Novice Hurdler Cinders And Ashes and Countrywide Flame, last year's Triumph Hurdle winner, are outsiders is an indication of the strength in depth here.

The good news is that, despite fears to the contrary, a quorum of rivals has been assembled to line up against Sprinter Sacre in the Queen Mother Champion Chase.

The bad news (for them) is that no-one expects even one of them to get within hailing distance of him as the seven-year-old and jockey Geraghty try to extend the horse's unbeaten record over fences to eight.

The devastatingly authoritative winner of last season's Arkle Chase is the most exciting horse to have raced on the National Hunt circuit in years.

Not only does the Nicky Henderson-trained star jump big and boldly, with faultless accuracy, but for each of his giant strides, the others seem to have to take extra one to keep up, just like Frankel.

With his record and his style, the horse has attracted many admirers, and let's hope he can gain the public standing of, say, Kauto Star, despite two-mile championship races not being rated as 'sexy' as Gold Cups.

In his sphere, however, Sprinter Sacre will star for many years to come.

It's hard to see anything dethroning the Willie Mullins-trained mare Quevega as she goes for a fifth win on the bounce in the OLBG Mares' Hurdle, ridden by Ruby Walsh.

Like Sprinter Sacre, she is head and shoulders above the rest - to such an extent, in fact, that it would perhaps be even more of a shock if she were defeated.

Quevega doesn't race much - only eight times (including six wins) since taking this prize for the first time in 2009 - but that doesn't seem to be any kind of a problem. She is simply magnificent.

Plenty would like to see her have a go at the guys as well as her own sex in the World Hurdle, maybe in addition to 'her' race on the Tuesday, as she would probably win.

By taking the course that has given Quevega four wins already, trainer Willie Mullins is pretty much guaranteeing one of the 27 most coveted prizes in jumping, so that's what she's doing.

Though if things work out as expected on Tuesday, perhaps… gosh, Cheltenham would love it.

This year is the first time for seven years that neither Kauto Star nor Denman will feature in the Gold Cup reckoning, and it certainly feels a little odd without them.

However, the big four for this year have the makings of a new breed of which both 'Kauto' and Denman - and their supporters - can be proud.

Of course, Long Run, trained by Nicky Henderson for racecourse chairman Robert Waley-Cohen, and the mount of his amateur jockey son Sam, is hardly a new boy. In 2011, they beat both of the old warhorses, before finishing third 12 months ago.

The Long Run camp remain commendably tight-lipped about their runner - also a two-time King George VI Chase winner - being only fourth favourite, and even though only Kauto Star has ever regained a Gold Cup, the eight-year-old is a serious contender.

Bobs Worth, another element of the powerful Henderson charge, has won four out of four at Cheltenham, including two at the Festival, and is a potent force.

His form on his sole outing this season, a win in Newbury's Hennessy Gold Cup, is rock solid, more so than the recent record of Sir Des Champs, who also has two Festival wins under his belt. But Sir Des Champs, one of the battalions coming over from Willie Mullins's HQ in Ireland, has been trained with just one day - 15 March - in mind, and better can be expected.

In contrast, Silviniaco Conti, who attempts to give Kauto Star's trainer Paul Nicholls a fifth Gold Cup, has only ever competed once at Cheltenham, a sound effort over hurdles.

But the horse, winner of all three of his races this season - decisively beating both Long Run and last year's runner-up The Giant Bolster (twice) in the process - is progressive and in the right hands.

For me, it's Silviniaco Conti - just.

With his seven Festival winners last year and a prolific time at Aintree too, Nicky Henderson looked set to force champion trainer Paul Nicholls to pull out all the stops to retain his crown.

In the end, at least in part because of the Grand National success of Neptune Collonges, Nicholls made it home to again lift the prize money-judged title that he took from Martin Pipe in 2006, and has kept ever since.

However, in the post Kauto Star/Master Minded/Denman era, and without the injured Big Buck's, Nicholls is second favourite to hold on to the crown that Henderson took twice back in the 1980s.

The Nicholls team, based at Ditcheat, Somerset holds a £250,000 lead going into the 2013 Festival, but Henderson's Festival string, prepared at Seven Barrows, Lambourn is markedly stronger.

Prize money this year stands at a record £3.76m, up £400,000, so even if the two protagonists say they don't keep count (do we believe them?) their supporters will be.