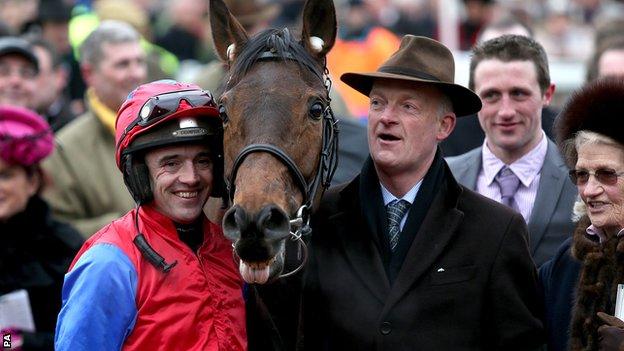 Quevega sprinted her way into the record books by winning the Mares' Hurdle for the fifth successive year on day one of the Cheltenham Festival.

The 8-11 favourite is only the second horse to achieve such a feat, alongside Golden Miller who won five straight Gold Cups in the 1930s.

Sirene D'Ainay led at the last but Quevega powered through for victory.

The win, by a length and a half, also sealed a first-day treble for trainer Willie Mullins and jockey Ruby Walsh.

"She's very precious," said Mullins. "To be associated with a horse that wins five times at the Festival, you don't dream of those things.

"I used to read about horses like Golden Miller in those racing books when I was young, but those horses are once in a lifetime - once in a century.

"I'm privileged to be part of it."

Quevega took her time before passing her rivals but then looked supreme in the last 100 yards to beat French horse Sirene D'Ainay, with Swincombe Flame two lengths further back in third.

"She's just so good and changes gear when she wants to," Mullins added.

"Ruby rode her with a lot of confidence. I thought he was five or six lengths out of his ground but when he slipped her wide, she found another gear.

"Once the last hurdle opened up for her you could see her putting her head down and you knew if she jumped the last she was going to make it."

Mullins has resisted calls for Quevega to run in Thursday's World Hurdle, but she is likely to head back to the Punchestown Festival in April, where she has also won for the last four years.

He said: "It wouldn't be fair to ask her to run again on Thursday, but I'd like to go to Punchestown."