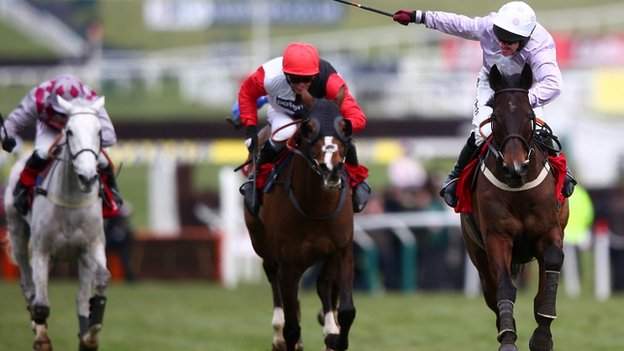 Jockey Paul Carberry guided Solwhit to victory with a perfectly timed run past Celestial Halo in the World Hurdle at the Cheltenham Festival.

Bog Warrior led for much of the race but it came down to a two-way battle, and Solwhit powered through to take it by two-and-a-half lengths.

It was a remarkable win for the Charles Byrnes-trained horse, which was sidelined for almost two years with leg problems before returning to action on New Year's Eve.

"He was idling a bit, I was always afraid to take it up too early," said Carberry.

"Charles said to attack at the last, so I timed it as well as I could. Celestial Halo made a bit of a mistake at the last, he pricked his ears a bit but kept going to the line."

With four-time winner Big Buck's ruled out by a leg injury, the race had been billed as a rematch between Oscar Whisky and Reve de Sivola.

The latter had edged January's Cleeve Hurdle on the same course, but there was to be no repeat as the pair were out of touch by the closing stages.

Bog Warrior - ridden by Bryan Cooper, replacing the injured Davy Russell who was taken to Cheltenham General Hospital with a spontaneous punctured lung - set a fierce pace that took its toll on the rest of the field.

Celestial Halo moved into position as Bog Warrior finally tired coming down the hill, but a mistake at the last and a decisive turn of pace from Solwhit combined to decide the result.

"Doubts raged before the World Hurdle about the unproven ability of both Solwhit and gallant runner-up Celestial Halo to last out the three miles, but they positively gobbled up the extra distance.

"Both are nine-year-old Grade One winners and quite impressed here, and when four-time champion Big Buck's, under the same ownership as Celestial Halo, returns they might give him something to think about.

"Meanwhile, with Sprinter Sacre still high in our minds after day two, it was very striking to see Cue Card positively run away with the Ryanair Chase with a bold front-running display.

"This talented horse is another to have been readily swept aside by 'Sprinter'- beaten by seven lengths in last year's Arkle Chase - giving us perhaps yet another idea of just how good he is."

"We were cheering it along, and my eldest son could not believe it. Going forward, it is great and he will take on Big Buck's next year."

"I was nervous before the race but Cue Card was so relaxed," said Tizzard. "It was a real professional effort and I am chuffed to bits with him."

Benefficient, a 20-1 outsider, overhauled favourite Dynaste in the Novices' Chase to give Ireland another win through trainer AJ Martin.

"I never missed a fence," said jockey Bryan Cooper. "He was wearing a hood for the first time and it made him settle down as he is a bit of a worrier. It gives me shivers up my spine to be a winner here."

Holywell then held off the field after making an early break for the finish line to triumph in the Pertemps Final.

"I thought he was there a bit early at the top of the hill," said trainer Jonjo O'Neill. "I was thinking it was a long way home from there, but Richie McLernon kept him going.

"They did not go mad, it was a good and sensible ride."

Liam Treadwell rode Carrickboy to victory in the Byrne Group Plate, the 2009 Grand National winning-jockey saying: "That was absolutely fantastic. From a personal point of view, that was better than the Grand National as Cheltenham is the ultimate.

"Carrickboy was as tough as you like up the hill."

5 comments
Back to top
unknown