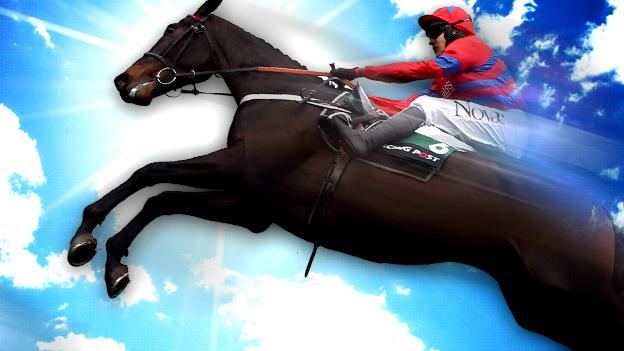 The Black Aeroplane. Jump racing's Frankel. Beautiful Monster. Call him what you will, Sprinter Sacre is the breathtaking steeplechaser that epitomises the thrill of jump racing.

Frankel was known as the Usain Bolt of the Flat racing game. Sprinter Sacre is the Pele of National Hunt.

"He's actually like a top footballer, like Pele on the ball, who used to do it all so easily because his speed and power and skill gave him the time to do it," said jockey Barry Geraghty, a Liverpool football fan.

"Funnily enough, at the same time as continuing to wow racing, Sprinter Sacre does actually pose a bit of a problem for the sport.

"You might well ask what on earth that could be apart from the fear that his devastating superiority- have you ever seen an easier 19-length winner? - might frighten off many potential opponents.

"But the thing is that we've never been very good at lauding two-mile steeplechasing champions.

"Everyone, not just close-up fans and purists, needs to know news of such flamboyant brilliance: let's go shout it from the proverbial roof tops."

Soaring over his fences with apparently effortless ease, aside from a minor blip at the ditch, the seven-year-old Sprinter Sacre served up a dominant victory in the Queen Mother Champion Chase.

It was a fence-to-fence feelgood display that left the Cheltenham Festival masses purring at a stunning 19-length victory.

Back in second was a proper horse in Sizing Europe, twice a Festival winner himself, but unable in his 11th year to challenge the new king of the two-mile division.

Sprinter Sacre is visually spectacular, but on this occasion the stats also do him justice.

A length in horse racing is measured at around eight feet, or 0.2 seconds in time.

So the winner was roughly four seconds ahead of his nearest rival. Geraghty looked around between the second last and final jump - but it was all over bar the last, and that proved a formality.

If anything, he may have eased up slightly going up the supposedly demanding hill. A horse bred to race but making it look like a training run.

Sizing Europe perhaps paid the price for racing directly head-to-head with his illustrious rival at one stage, and also stumbled badly on the downhill straight.

In 21 races over fences, the Henry de Bromhead-trained Sizing Europe has never been out of the first three and his previous biggest defeat was seven-and-a-half lengths.

Now aged 11 and towards the twilight of his career, the Irish challenger trailed by 19 this time. That's about 152ft, or 46 metres, nearly the length of five London buses stretched in a line.

A word of caution here. This was not a record-winning distance in the race.

Master Minded retained his crown a year later with a seven-length defeat of Well Chief when aged just six, but while racking up victories elsewhere he never won at the Festival again.

However, there remains a genuine feeling Sprinter Sacre - known as Beautiful Monster by some of the younger team in the Henderson yard after a song by American R&B artist Ne-Yo - can justify his equine superstar tag.

When the French-bred gelding made his debut over fences at Doncaster in December 2011, his only mistake was at the water jump. It was a bit small for him.

He has now won all eight chases, none by a distance of less than six lengths. He is also, at 1-4, the shortest-priced Festival winner since Arkle won his third Gold Cup at 1-10 in 1966.

BBC 5 live pundit and former jockey Luke Harvey: "Sprinter Sacre is a joy to watch. He is the ultimate racehorse. Barry Geraghty was showing off going into the last - he was asking him for the picture jump. He is brilliant and what I like most about him is that he knows it. That's what Cheltenham is all about."

Eight-time former champion jump jockey Peter Scudamore: "I've seen horses as good as that at Cheltenham, but they are things that happen very rarely. When you are riding horses like that you are in a zone where no-one else can be. You might get more money playing football but there are few things in life that you get the same enjoyment from."

Andrew Thornton, Cheltenham Gold Cup winner on Cool Dawn in 1998, who rode fifth-placed Tataniano in the Champion Chase: "For the first mile I wasn't that far behind, but I was further behind him at the finish. It was a sight to behold to see Sprinter Sacre in front of me. He was quick and fluent."

Nicky Henderson, the meeting's all-time leading trainer now on 49 career wins, has overseen a few good horses in his time, but you suspect he thinks this is the best.

It has been a nervy time for Henderson, with the weight of public expectation largely on his shoulders.

"Sometimes you get these things that are quite special to watch and I hope the public did enjoy watching him because I'm not sure I did," said the 62-year-old Lambourn trainer.

"Sprinter Sacre is just very, very special. You sort of enjoy it, but they still have to do it - there are fences to jump - and he just has that way of doing it."

Henderson said the horse is likely to stay at trips of two miles, although two-and-a-half miles at Aintree might be considered next year.

The horse runs in the red and blue colours of owner Caroline Mould.

"If it doesn't sound too arrogant, last year when he won the Arkle Trophy it was OK because we were pretty confident he'd win that and he wasn't really in the public eye," she said.

"Everyone says I should enjoy him and moments like today, and I am, but I'm always relieved when it's all over and I can enjoy it properly."

Sprinter Sacre may next run in the Champion Chase at Punchestown on 23 April.

It will give Irish racegoers a chance to witness what their English counterparts have been savouring.