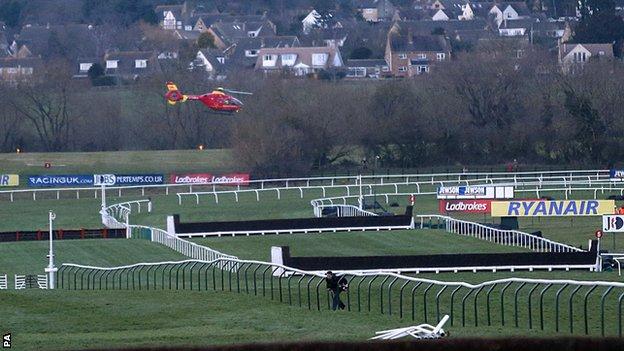 Amateur jockey JT McNamara has suffered a serious neck injury in a fall at the Cheltenham Festival.

The 37-year-old Irish rider was badly hurt when his mount Galaxy Rock fell at the first fence in the Fulke Walwyn Kim Muir Challenge Cup.

Racing was delayed for 30 minutes as McNamara was airlifted to Frenchay Hospital in Bristol.

He explained: "JT has suffered a serious neck injury.

"He is being looked after at the regional spinal unit but as yet he is still waiting for a scan."

McNamara was conscious after the fall but had difficulty breathing and was placed into an induced coma, said McGoldrick.

He added the jockey was placed on a spinal board as a precaution.

Fellow jockey AP McCoy told BBC Radio 5 live: "It's a dangerous sport and it's a sight that you see that unfortunately crops up; we're very lucky we have excellent medical care. We just hope he's going to be OK."

McNamara was thrown to the ground after his mount, trained by Jonjo O'Neill, fell at the first fence in the sixth race of the Cheltenham Festival's third day.

The jockey, from Limerick, was injured in a steeplechase for amateur jockeys only.

McNamara finished fourth on Galaxy Rock in the Kim Muir at the Festival two years ago.

Galaxy Rock was reported to be unhurt.

Also on Thursday, the David Pipe-trained racehorse Matuhi suffered a serious spinal injury and was put down after falling at the last fence in the Byrne Group Plate.

Earlier, jockey Davy Russell was taken to Cheltenham General Hospital with a punctured lung, which rules him out of riding leading contender Sir Des Champs in the Gold Cup on Friday.

The 34-year-old, who rode the horse to victory at last year's festival, was injured in a fall from Un Beau Matin at the last in Wednesday's Coral Cup.

He had the injury drained in hospital and took up his first two rides on Thursday, but the problems resurfaced and Russell returned to hospital.