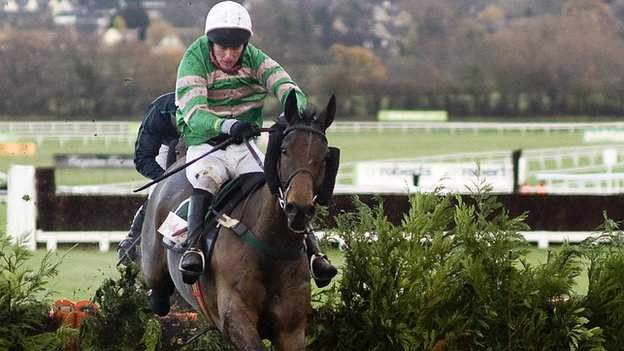 Injured jockey JT McNamara's wife Caroline has flown in to be at his bedside in intensive care.

The Irish rider, 37, was placed in an induced coma and was having surgery for a fractured spine on Friday, following a fall at the Cheltenham Festival.

The amateur jockey has injured the C3 and C4 vertebrae in his neck, said Dr Adrian McGoldrick, chief medical officer of the Irish Turf Club.

McNamara was thrown from his mount on Thursday and airlifted to hospital.

The jockey, from Limerick, was badly hurt when Galaxy Rock, trained locally in Gloucestershire by Jonjo O'Neill, fell at the first fence in the Fulke Walwyn Kim Muir Challenge Cup.

Dr McGoldrick said McNamara was conscious after the fall but he had difficulty breathing and had been placed into an induced coma.

Speaking on Friday morning, he said: "We can confirm that amateur rider JT McNamara suffered two fractured vertebrae in his neck yesterday.

"He is currently in theatre at Frenchay Hospital, Bristol. There will be no further news until tomorrow and we will keep everyone updated. His wife Caroline is with him."

Lisa Hancock, chief executive of the Injured Jockeys' Fund, told BBC Sport: "JT's wife and her brother arrived at Bristol Airport at about 8am and we were able to link up with them there.

"We are now at the hospital with them and will help them with what they need, with accommodation for the next few nights or whatever."

McNamara, who has won four races previously at the festival, is a popular figure among his riding colleagues, who were preparing for action on Gold Cup day at Cheltenham on Friday.

The Injured Jockeys' Fund is a charity which helps the families of riders hurt in falls.

Hancock added: "With this particular case we are working closely with the Irish Turf Club and their senior medical officer.

"We can't do much on the medical front but as a general support, we can help. It's a dreadful time for all concerned and if we can just help by taking a bit of pressure off."

It is understood McNamara's three children have stayed in the Republic of Ireland with relatives.