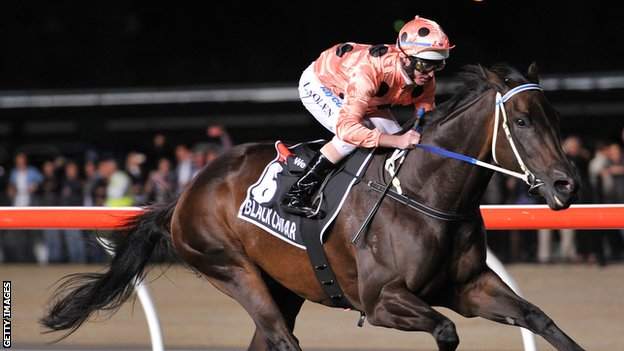 Black Caviar has won her 24th consecutive race with victory in the William Reid Stakes at Mooney Valley, Melbourne.

"She felt amazing to me, travelled well in the run, flowed into the race on her own accord, and she took care of the rest," said her jockey Luke Nolen.

"It has been a privilege to be part of such a great racing story."

Under a motionless Nolen, the unbeaten mare saw off six rivals over the six furlong race to post a comprehensive four-length victory.

She now moves alongside Kingston Town on an Australian record of 14 Group One wins.

This win is her second since winning the Diamond Jubilee Stakes at Royal Ascot by a head in June 2012.

It was revealed she had torn muscles in her back during the race, leading to an eight-month lay-off where a combination of laser therapy treatment and exercising in water helped her rehabilitation.

Her comeback in February saw her a convincing winner of a race named in her honour - the Black Caviar Lightning Stakes.

Trainer Peter Moody refused to be drawn into speculation over her future, with reports suggesting she may be retired at the end of the season.

"It's scary how well she is going," said Moody.

"You just run out of words. As a headline for our sport she's second to none."

Black Caviar is next scheduled to race in the T J Smith Stakes at Randwick on 13 April.