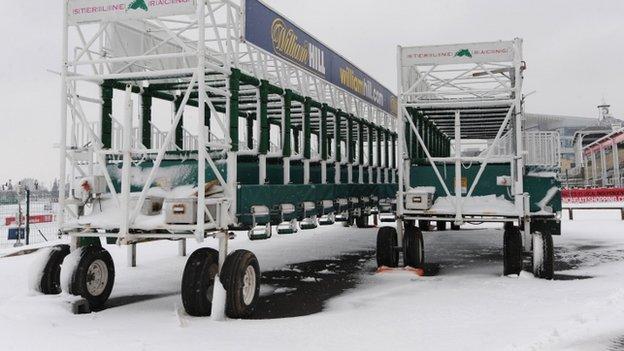 Racing at Doncaster and Newbury on Saturday has been called off as heavy snow continues to disrupt the schedule.

Officials will now aim to run the Doncaster programme, which includes the William Hill Lincoln, on 30 March.

Ahead of a planned second inspection at Newbury, clerk of the course Richard Osgood said: "We have had to call it off. The course is unraceable."

Bangor, Kelso and Stratford were called off on Friday but racing is expected on the all-weather circuit at Southwell.

Clerk of the course at Doncaster, Roderick Duncan, called off the card following an inspection at 06:00 GMT.

He said: "We have had about two to three inches of snow overnight and it's still falling now.

"Daytime temperatures are forecast to stay at or below freezing and further snow is forecast on Saturday.

"The meeting will now switch to next Saturday (30 March) after contingency plans to transfer the meeting were agreed on Thursday."

Sunday's meeting at Wincanton is expected to go ahead after the track passed an 08:00 GMT inspection on Saturday despite heavy rain in the region.

Clerk of the course Barry Johnson said: "We had 15mm of rain in the last 24 hours and the course has taken it really well.

"We have just showers forecast today and tomorrow now and we are not planning any further inspections."