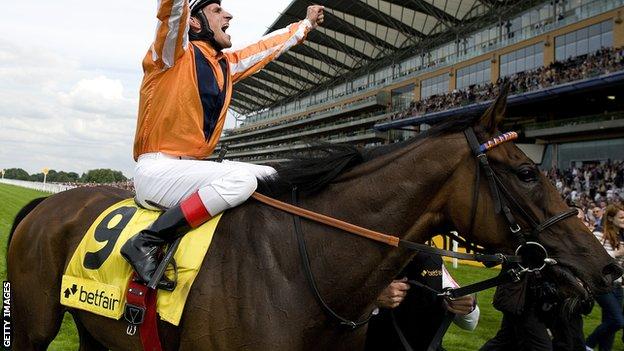 Their offspring is expected to be born in early 2014, with a racecourse debut likely as a two-year-old in 2016.

Danedream missed out on defending her Arc title in France because of an outbreak of swamp fever.

The German filly, then based at Cologne racecourse, was not ill but horse movements were banned by vets concerned about the infectious disease spreading.

Frankel, who was retired in October 2012 after an unbeaten career which brought 14 successive victories, began his first season at stud in Newmarket last month.

Danedream was a surprise 20-1 winner of the Arc, Europe's richest horse race, in October 2011.

Although three fillies (Zarkava won in 2008 and Solemia triumphed last year) have landed the mile-and-a-half French contest in the past five years, colts had won all previous runnings since Urban Sea in 1993.

Danedream went on to win the King George VI and Queen Elizabeth Stakes at Ascot in July 2012.

She was retired at the end of last term after five Group One wins in a career that earned more than £3m in prize money. She has been boarding at Newsells Park Stud in Hertfordshire.

Frankel never raced further than the extended mile and a quarter of the Juddmonte International at York and excelled over a mile.

Pairing with the winner of an Arc, which is run over a mile and a half, could potentially produce a much sought-after mix of speed and stamina.