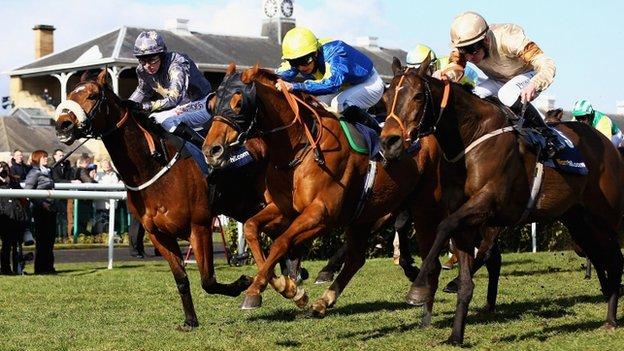 Levitate landed a narrow victory for jockey Darren Egan in the Lincoln Handicap, the first big race of the new Flat racing season.

Egan was challenging for last season's apprentice title before breaking his collarbone late on in the campaign.

The race had been postponed from last Saturday because of the snow at the Doncaster track.

Levitate, who had previously been trained by Alan McCabe, was making a first start for Quinn and came with a late lunge to get the better of his rivals.

Egan, who had never ridden Levitate before, was thrilled with the victory.

"My instructions were to get him across just behind the leaders, I got a bit of luck when he picked up and he stuck his head out to the line," he said.

Quinn, who also won the race with Blythe Knight in 2006, added: "I was so happy he got in the race this week. He'd been working pleasingly and we thought he'd go in the ground.

"We decided to claim off him with Darren and it was the right thing to do. The 3lb won us the race. The lad had never ridden him but he rode him as we said.

"To win another Lincoln is phenomenal. It's great for the lads at home as it's been an awful winter for stable staff."