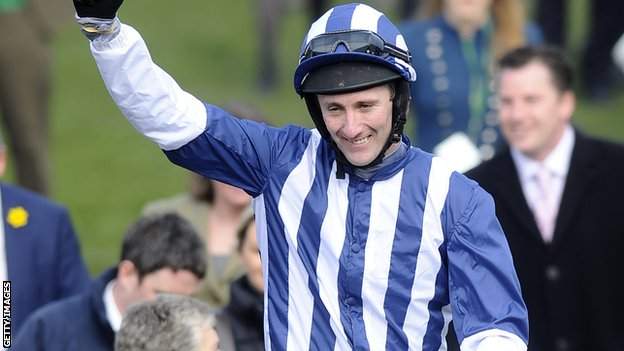 Trainer Rebecca Curtis is preparing her horse Teaforthree for the Grand National - but her thoughts are with the jockey who rode him to victory at the Cheltenham Festival last year.

Irish amateur JT McNamara, who won the 2012 Diamond Jubilee National Hunt Chase on the Welsh-trained horse, is paralysed in hospital after a fall at the Festival on 14 March.

While Welsh National runner-up Teaforthree is likely to be ridden by Nick Scholfield at Aintree on Saturday 6 April, McNamara is in Frenchay Hospital, Bristol.

"You can't even speak words what I feel for him and his family. It's just an awful situation to be in," Curtis told BBC Wales.

"It couldn't have happened to a nicer, hard-working man. It's just horrendous really."

McNamara, now 37, was recruited to ride Teaforthree for the National Hunt Chase, for amateur riders only, in March 2012.

It was his fourth Festival victory in a distinguished amateur career which also saw him win seven times in cross-country chases at Cheltenham between 2004 and 2007 on Spot Thedifference, owned by JP McManus and trained by Enda Bolger.

Teaforthree went on to finish runner-up behind Monbeg Dude in the Welsh National at Chepstow in January when ridden by 17-time champion jockey AP McCoy.

McNamara suffered a serious neck injury after a fall from his mount, Galaxy Rock, at the first fence in the Fulke Walwyn Kim Muir Challenge Cup at Cheltenham.

Asked if a Teaforthree victory in the Grand National would have added significance, Pembrokeshire trainer Curtis said: "To be honest, for JT, it will be the last thing on his mind.

"For him to be where he is, whether he watches the National or not, it's just more upsetting for him to be in that situation. It's absolutely heartbreaking for him."

Teaforthree disappointed last time out but his second to Monbeg Dude in December's Welsh National at Chepstow and win in last year's four-miler at Cheltenham make him an interesting contender.

The nine-year-old gelding, who is set to carry 11st 3lb in the National, is rated around a 16-1 chance with bookmakers. On His Own, trained in Ireland by Willie Mullins, is the 7-1 favourite.

"Teaforthree's really fit and well, he did a really good piece of work on Wednesday. We couldn't be happier, but it's just one of those races where you need to have so much luck in running," said Curtis.

"Even with the best jumper, you can have fallers in front of you and around you. There's a lot of hard luck stories in the National where a horse is going well and brought down by other runners. I just think you have to be very lucky. All we can do is get him there fit and well."