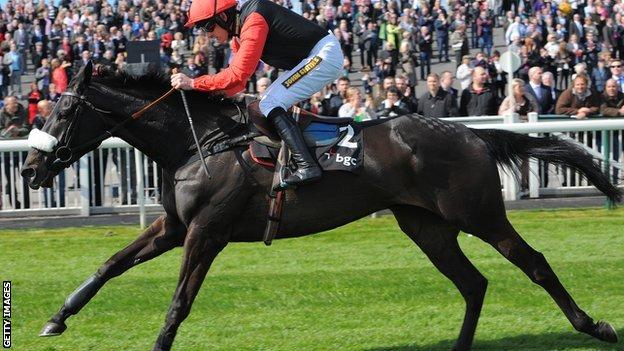 Record-breaking hurdler Big Buck's will have a sixth Grand National Festival victory at Aintree as a target when returning from injury next season.

The 10-year-old has won his last 18 races, including four World Hurdles at Cheltenham, but was ruled out for this season in December 2012 with a leg injury.

Owner Andy Stewart has told BBC Sport the next campaign could be his last.

But trainer Paul Nicholls believes he could run another four or five times.

"His maximum number of runs next season will be two - Cheltenham and Liverpool [Aintree]," said Stewart.

"We would probably draw stumps then. Running horses as 12-year-olds [Big Buck's will officially turn 12 on 1 January, 2015] doesn't appeal to me."

Big Buck's has been unbeaten since he reverted to hurdles from steeplechases more than four years ago.

He won the Mildmay Novices' Chase at Aintree in April 2008 but was switched to hurdles after unseating Sam Thomas in his next race, the Hennessy Gold Cup at Newbury.

Since New Year's Day 2009, he has been unbeaten with four successive victories for jockey Ruby Walsh in the Liverpool Hurdle at the National meeting among his wins.

The precise future campaign will be mapped out according to the well-being of the gelding, who has earned a total of more than £1.2m in prize money.

"He won't come into training until September, and we will evaluate as the season goes on," said champion trainer Nicholls.

"My view is he might have four or five races left in him, but if a horse like that is not right, we're not going to take any chances."

Stewart said when the time comes, Big Buck's would enjoy his retirement at the Somerset yard of Nicholls, and not try another discipline, such as dressage, like former stablemates Neptune Collonges and Kauto Star.

"He'll stay where the people who know him best can enjoy him. He won't be going tap dancing," said Stewart.

"He's fine. If we really wanted to, we could go to the Long Walk Hurdle at Ascot [in December] but he's going to be 11 next year and I think we'll bring him back to try to win a fifth World Hurdle.

"If he comes out of that all right, he'll go to Liverpool to try to win the hurdle race there for a fifth time."

Stewart said Big Buck's won his last World Hurdle at Cheltenham in March 2012 despite showing signs of a virus afterwards.

"Big Buck's was coughing, but in spite of that he's so superior that he still managed to win," said Stewart.