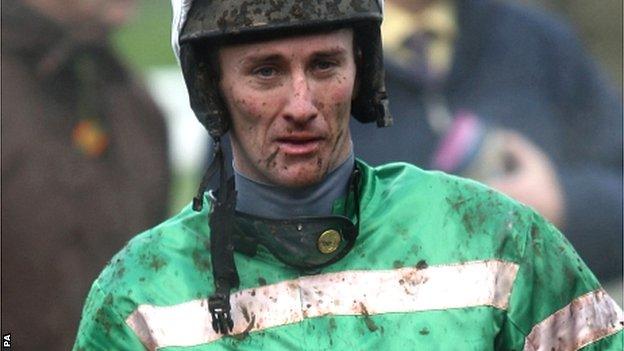 The amateur jockey is in hospital after suffering a fall during the Cheltenham Festival last month.

O'Leary announced the gift after his horse Akorakor won a race at the Irish Grand National meeting at Fairyhouse on Easter Monday.

Mangan had been in tears 17 days earlier on Gold Cup day when her mount Oscar Delta unseated her in the latter stages when victory seemed assured in the Foxhunter Chase.

McNamara suffered serious neck injuries a day earlier and was taken to Frenchay Hospital in Bristol, where he remains pending transfer to the national spinal unit at the Mater Hospital in Dublin.

O'Leary, owner of Gigginstown House Stud, promised to offer 200,000 euros (about £170,000) to the winning owner of the bumper race and after claiming the prize himself, he donated the money to McNamara.

The airline chief is a major supporter of National Hunt racing and his big-race victories as an owner have included War of Attrition in the 2006 Cheltenham Gold Cup.

Speaking to BBC Sport at the Cheltenham Festival in March 2011, O'Leary said: "The Irish come to Cheltenham because this is like religion. We grew up as children following Cheltenham first and the Catholic church second."