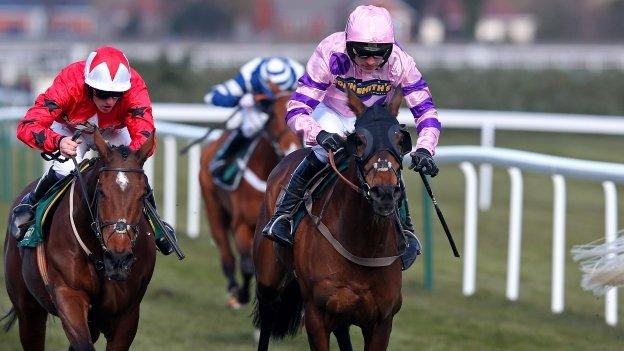 Zarkandar edged out younger rival The New One in a thrilling finish to win the Aintree Hurdle on day one of the Grand National meeting.

Ruby Walsh got the Paul Nicholls-trained gelding home by half a length with Thousand Stars third.

The 11-2 winner responded to the use of first-time blinkers to step up in trip to two and a half miles.

Zarkandar's win will have done no harm to Walsh's confidence as he prepares to ride current favourite On His Own for Irish trainer Willie Mullins in the National on Saturday.

A fall from Zarkandar on National day last year ruled the jockey out of the famous race for the second time in three years.

The win was also a boost for Nicholls in his battle to overhaul Nicky Henderson for the trainers' title.

Henderson's charge Oscar Whisky, who was chasing a third win in a row in the Aintree Hurdle, never looked likely to succeed.

Nicholls is now likely to aim the six-year-old horse at the three-mile World Hurdle at Cheltenham next March, for which his injured stablemate Big Buck's may seek a record fifth victory.

The trainer said afterwards: "He wore blinkers before we had him as he was so colty.

"I thought we might put them on in the Champion Hurdle but while he kept winning I left them off.

"I felt he gave up too easy in the Champion Hurdle. I put them on at home three days ago and he was just like a different animal. There was a phenomenal improvement.

"He'll be going over a trip next year. We tried this year and he lacked a bit of pace. He stayed really well today and he's bred to. Today was the first step up."

In the big steeplechase of the day, Cooper guided home 7-2 chance First Lieutenant, trained in Ireland by Mouse Morris, from runner-up Menorah, with favourite Silviniaco Conti in third.

Silviniaco Conti, from the Nicholls yard, was a late faller in last month's Cheltenham Gold Cup when seemingly travelling well and was not at the top of his game here.

The seven-year-old, who won three top races earlier in the season, is now around 10-1 (from 8s) for next year's Gold Cup, while First Lieutenant was trimmed to 14-1 (was 20s).