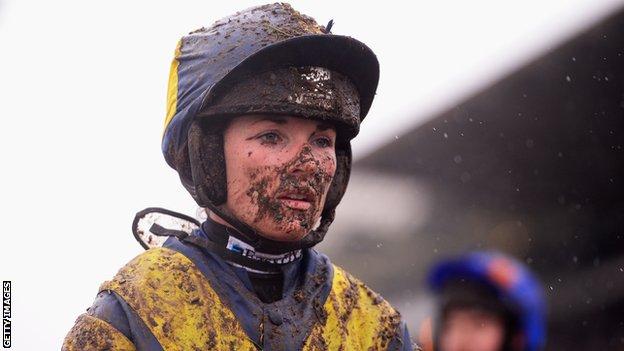 Jockey Katie Walsh says becoming the first woman to ride a Grand National winner would be "a fairytale".

Walsh, 28, is aiming to better the third-place finish she managed with Seabass - trained by her father, Ted - at Aintree last year.

Asked what it would be like to win, she said: "It would be a fairytale and I'd love to be a part of it."

Last year, Walsh become only the 15th female jockey to ride in the Grand National since Charlotte Brew made history on Barony Fort in 1977.

Seabass was in contention right to the last before Sunnyhillboy and eventual winner Neptune Collonges kicked on to produce one of the closest finishes in the race.

Still, the result was the best by any female jockey in the Aintree showpiece to date.

"I thought just for a couple of seconds that it might just happen," said Walsh, reflecting on her chances of winning.

Seabass is 10-1 second favourite for this year's race, but Walsh, whose brother rides 7-1 favourite On His Own, said it would take something special to win.

"There's a lot to happen and there's a lot of fences to be jumped," she told BBC Radio 5 live. "You need a lot of luck. I'm looking forward to it again and it's good to have last year's experience under my belt."