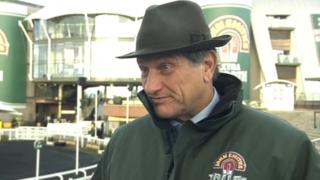 Former jockey Bob Champion says the death of Katie Walsh's mount Battlefront on the opening day of the Aintree Festival is "one of those unfortunate things".

The 11-year-old, trained by Walsh's father Ted and owned by her mother Helen, collapsed and died after being pulled up at the 11th fence of the The Fox Hunters' Chase, the big race for amateur jockeys.

Walsh is due to ride Seabass in Saturday's Grand National. She rode the same horse to third place last year but Champion believes she will "have a harder job" this time out. Walsh's brother, champion jockey Ruby Walsh, will ride On His Own trained by Willie Mullins.