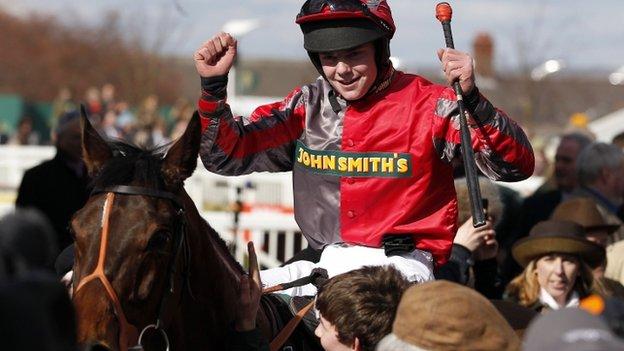 Selkirk-based Stuart Coltherd said the 13-year-old was "fresh" on his return home and received a warm welcome from well-wishers.

"Everybody had some champagne and I hope nobody's got too bad a head this morning," Coltherd told BBC Scotland.

Tartan Snow, owned by Rory Westwood from Auchterarder, edged out Cool Friend in a thrilling finish at Aintree.

"It's unbelievable," said Coltherd. "We've always believed in him and he's given the syndicate so much fun.

"The owners always back him hoping that the dream will come true. This is the biggest race we've ever won. I was up lambing at 2am so this makes it worthwhile.

"He's 13 so I don't think he'll be back next year, but never say never. Jamie was great on him, he's got a fantastic record on him, he's a great little jockey and rode a winner on the Flat at Doncaster just over a week ago.

"Tartan Snow had his first race as a seven-year-old and hasn't got too much mileage on the clock. He came off the trailer really fresh when everyone was here to see him."

Hamilton added: "I can't believe it. My first ride at Aintree and it's actually over the big ones.

"The horse has been very good to me and I can't believe we've come here and ended up winning this.

"I've been riding since I could walk really and this is definitely the best thing that's happened so far anyway."