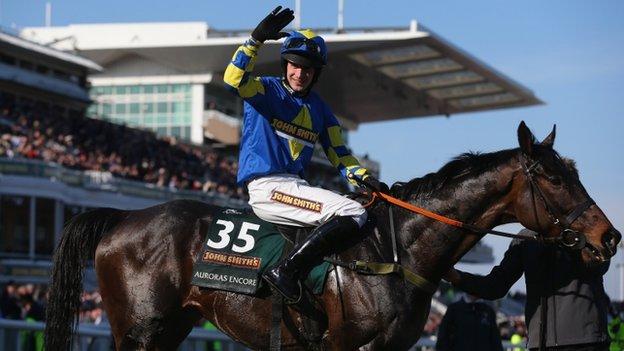 Auroras Encore sprang a 66-1 surprise to win the 166th Grand National by nine lengths at Aintree.

The 11-year-old, trained by Sue Smith and ridden by Ryan Mania, jumped superbly as 17 of the 40 runners finished the race.

Seabass was sent off the 11-2 favourite, as jockey Katie Walsh sought to become the first female rider to win the famous steeplechase.

Where did your horse finish?

However, it was Walsh's fellow amateur Sam Waley-Cohen who played a leading role as he sent 2011 runner-up Oscar Time towards the front in the latter stages.

Welsh National runner-up Teaforthree mounted a challenge before Scottish jockey Mania - in his first Grand National ride - appeared at the vanguard with his mount travelling strongly.

They made no mistake at the last and raced away up the run-in for a comprehensive win.

"There are no words to describe it," said the 23-year-old Scot. "I got a dream ride round. I couldn't believe my luck.

"I couldn't fault the horse. I had a choice of two but I thought I better stay loyal to him. He loved every second of it. He was just class."

Mania gave up riding for six months in 2011 when trainer Howard Johnson lost his licence, before deciding to come back to the sport with the encouragement of Sue Smith and her former showjumper husband Harvey.

Auroras Encore went largely ignored by punters after a disappointing sequence of unplaced runs following a fine second, beaten a neck by Merigo, in the Scottish National at Ayr a year ago.

But the drying ground may well have been the key to the gelding's improvement as Smith became the third female trainer to win the race after Jenny Pitman (Corbiere and Royal Athlete) and Venetia Williams (Mon Mome).

The Bingley-based handler said afterwards: "It's unbelievable. He gave him such a good ride.

"I knew the ground was right for him and hoped everything else was. He stayed down the middle and had a bit of luck in running. He didn't have a lot of weight and that helped, too.

"He's such a grand little horse, you can ride him any way you like."

Edinburgh-based Beaumont, 78, was born in Liverpool and worked as a bell boy at the city's Adelphi Hotel at the age of 14 before going on to carve out a career in the catering and hotels business.

After two fatalities in each of the two previous runnings, all 40 horses and jockeys returned safely. Only two horses fell with six jockeys unseated, while it was the first time in the race's history that the entire field were still in contention up to Canal Turn, the eighth fence.