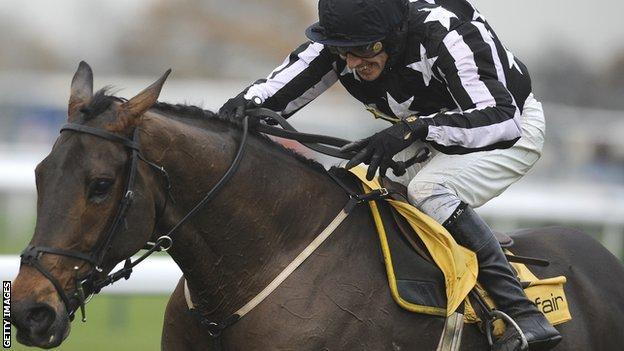 Racing reporters, correspondents and experts give their verdicts on who will win the Grand National at Aintree.

"Rare Bob has been carrying lots of weight really well and his rider Bryan Cooper will be champion jockey in Ireland or England one day. The trainer's horses are flying."

"Chicago Grey looks extremely well handicapped after his win in a Grade Two race at Navan and if he enjoys better luck than last year, should be there or thereabouts. Stable is in brilliant form."

"Younger legs might well have found out the veteran Imperial Commander if he had run in the Cheltenham Gold Cup but his experience, quality and sure-jumping are ideal for Aintree, and will help to cancel out the weight burden."

"I can visualise Imperial Commander jumping well and he has more than enough quality to be right there at the finish."

"The BBC are going to look very shrewd or very foolish as we all seem to be with Imperial Commander. He's the class horse in the race. Hoping for a safe race and a great story behind the winner."

"The owner J P McManus has a terrific hand this year and his jockey, Tony McCoy, had a hard choice to make, but Colbert Station has tremendous potential to be better than we've seen so far and looks the right type for this test."

"Ballabriggs is no back number and he is back to the same mark he was when winning two years ago for trainer Donald McCain. Joncol could surprise at a big price."

"Chicago Grey has a nice profile and a mid-season wind operation looks to have helped him. Good luck to everyone having a wager."

"Wouldn't it be a great story for racing if Katie Walsh could be the first female jockey to win the Grand National on Seabass? Last year's runner-up Sunnyhillboy could go close again."

"I'm going for a 1-2 for Ted Walsh, who I consider to be one of the very top trainers, with his daughter Katie on Seabass edging out champion jockey AP McCoy."

"Wales are enjoying a golden sporting year and it can be capped by Cappa Bleu, who bids to become only the second Welsh-trained winner. The last was in 1905."

"I'm predicting a fairytale and historic result with Seabass winning under Katie Walsh. The horse seemed to revel in the Aintree experience 12 months ago and, if ridden slightly more patiently, is well capable of going two places better."

"Chicago Grey has a handy weight and the guidance of highly-rated trainer Gordon Elliott. Roberto Goldback looks capable of sneaking a place."

1. Imperial Commander 2. Cappa Bleu 3. On His Own 4. Always Waining

"Quite simply Imperial Commander is the best-handicapped horse in the race by a country mile and the trainer's two previous winners were ridden by substitute jockeys. Sam Twiston-Davies replaces the suspended Paddy Brennan."

"Seabass was heroic in defeat when third last year and is potentially well handicapped despite carrying 5lb extra this time."

"Roberto Goldback was brought over from Ireland to the yard of Nicky Henderson to be specifically trained for the National and can give the trainer his first victory in the race."

"A good stayer, Teaforthree should have no problem with the ground and like a few previous winners, is trying the race for the first time."

"I think On His Own should have won last year but fell late on. With Ruby Walsh on board, and the highly-respected trainer Willie Mullins, he will win. He looks unbelievably well weighted."

"Seabass was third last year, looks to have the stamina for this demanding test, jumps well and appears to have been trained specifically for today."

"Well handicapped - compared to his rivals - despite top weight, Imperial Commander is a safe jumper and should stay the trip for jockey Sam Twiston-Davies."

"Chicago Grey looks dangerously well handicapped. He stays the trip and the Gordon Elliott stable is in sparkling form. His jumping is the only slight worry."