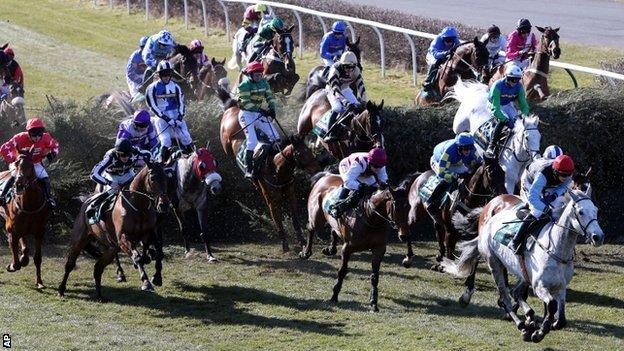 Aintree racecourse officials say they will continue to review safety at the course, despite the 2013 Grand National passing off incident-free.

The race featured changes to the construction of the course fences and alterations to the start of the race.

There were were only two fallers in the 40-strong field and all horses and jockeys returned safely.

"Far fewer fallers were recorded, as with the other races over the Grand National course during the meeting, and we also need to recognise the part the jockeys have played right from the off. British racing should be tremendously proud of their contribution.

"But as ever, we will review every aspect of the race. We will not stand still here."

Paul Bittar, Chief Executive of the British Horseracing Authority warned: "One incident-free running of the race gives us no sense of complacency.

"We will continue to demonstrate our unceasing commitment to horse welfare and to articulate our strong record so that the race's reputation - and that of the sport in general - is not held hostage to fortune by those with nothing invested in the sport."

It was the first time in 166 runnings of the Grand National that the entire field was in contention up to the Canal Turn, the eighth fence.

The race was won by the 66-1 chance Auroras Encore, ridden by Ryan Mania and trained by Sue Smith.

There had been two fatalities in each of the previous two runnings of the Grand National, leading to the changes in the fences, which now have a core made of more flexible plastic, rather than wood, and are covered by the traditional spruce.

However the opening two days of this year's meeting at the Liverpool track saw two further deaths.

On Thursday, Battlefront, ridden by Katie Walsh collapsed and died after being pulled up during the Fox Hunters' Chase while on Friday Little Josh, ridden by Sam Twiston-Davies and trained by his father Nigel, had to be put down after suffering a fractured shoulder in a fall during the Topham Chase.

Jenny Pitman, the first female trainer to win the National when Corbiere triumphed in 1983, said: "I've not been one of the people against modifications made to Aintree, as we had to look at it and changes needed to be made.

"What I am a little concerned about is that it seems to me we're making the fences softer and softer on park tracks like Ascot, Kempton and Haydock. Horses, by nature, will start taking liberties and not jumping as clean.

"If we're not very careful, to appease the general public, we will be making the fences softer, horses will be going faster and the falls will be more severe."

Roly Owers of World Horse Welfare welcomed the results of Saturday's race but says that the number of runners needs to be looked at again.

"This race was exciting and will be remembered for all the right reasons. We're very pleased that all the horses and riders returned safely," he said.

"Our number one concern with the Grand National was the numbers of fallers, so we are very pleased that only two horses fell, and while some unseated their riders, none were brought down by other horses.

"Aintree can take considerable credit for the improvements they have made to the course. It is too early to say with certainty whether the softer fences are making a difference, but with fewer falls in the other races held on the National course over the past two days, the initials signs are encouraging.

"We would still like a trial reduction of the maximum field size to around 30 to further lessen the risk. This race demonstrated we are moving in the right direction, but the risks to horse and rider were still twice that of other National Hunt races."

RSPCA equine consultant David Muir, who played a significant role in the modifications to the track, was pleased with the changes they brought to the race, but agreed the number of horses needs to be reduced.

"The fences are still there to be jumped - they're not soft," he told BBC Radio 5 live's Sportsweek.

"The problem in the past has been horses have been jumping fences (at other tracks) where they can go through a bit of the top. Suddenly, they come to Aintree, and if they were a bit low and hit those solid posts, they had nowhere to go other than into a rotational fall.

"We had too many horses dying from spinal injuries, where they never got up.

"I've never been comfortable watching the Grand National and still think the numbers are high."