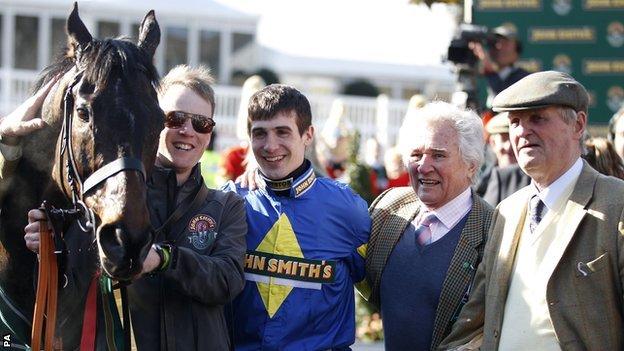 Harvey Smith made headlines in the 1970s for a controversial V-sign. On a day where the Grand National felt grand again, this time V was for victory.

The 74-year-old former Olympic showjumper was a key player in masterminding the Aintree triumph of 66-1 shot Auroras Encore, trained by his wife Sue.

Yorkshireman Smith has been at the centre of a story or two in his colourful life, never more so than in 1971.

Straight-talking Smith was a household name back then - at a time when BBC TV regularly broadcast equestrian events - and famously gave a two-fingered salute to judges when winning the Hickstead Derby.

The rebel rider clashed with the equestrian establishment but was a charismatic hero to others as he did things his own way, including spending time as a professional wrestler.

But at Aintree his success with winning horse Auroras Encore was down to a partnership with his wife Sue, herself a former showjumper.

"We do the training together," explained Sue. "Harvey is a hard man. You can't knock him down and he gets everyone working hard, including the horses."

While she concentrates on the training side, he looks after the gallops, driving the horse lorries and instructing the jockeys.

He is something of a National veteran, riding over the fences during his career and once presenting the trophy to the winner, and has seen the marathon contest evolve down the decades.

With increased concern over welfare following two equine fatalities in each of the last two National runnings, Aintree made fundamental changes for 2013.

The most significant safety development is the introduction of more forgiving, flexible plastic birch as the fences' core structure rather than wood, which is then covered by a thick layer of spruce.

And as it turned out, for the first time in the National's 166-year history, a maximum field of 40 all made it to the Canal Turn unscathed, successfully jumping the first seven obstacles - including the testing sixth fence, the infamous Becher's Brook.

Riders paid heed to warnings about haring over the fences too quickly at the start of the race. There were just two fallers, six riders unseated and 33 horses were still in contention going out onto the second circuit.

Auroras Encore has left everybody speechless. Sue Smith trains this horse at her home in Bingley. Ridden by Ryan Mania, the young Scot who was seduced back into being a jockey. He has been successful here in just his first ride in the Grand National. A real shock result.

All 40 riders and horses returned home safely but, even so, Aintree officials said they would continue to review safety at the course.

"All the horses came back in one piece and so did the jockeys. Full marks to Aintree and even the RSPCA man. He has thrown his bit in, they have all worked hard and it is onward and upwards for the Grand National," said Smith.

The RSPCA man he refers to is the charity's equine consultant David Muir who has lobbied and liaised with racecourse officials over improving safety.

Muir said the new fences, combined with other initiatives such as shortening the distance of the race slightly from four and a half miles, meant - in his words - the public could watch without "feeling queasy" at seeing lots of fallers.

"It is still the longest race in the world and they are still probably the biggest jumps in the world but after the third or fourth fence, I became very comfortable looking at horses being able to achieve what was asked of them," he said.

The Smiths, who are based in Bingley, West Yorkshire, are familiar with the risks posed by Aintree's big fences, particularly under the old designs.

Their one-time stable star The Last Fling, who won 14 of his 55 races, was seventh in the National in 2000 but died in the race two years later after a fall at the Canal Turn. In 2003, the yard also lost Goguenard after he unseated his rider at the 19th fence.

It was very different on Saturday as Harvey sent out his jockey with the simple instruction to go out and enjoy himself.

"He told me he had a plan, so I said 'go out and execute it,'" said Smith, who is one of those mischievous characters who deadpans answers with a glint in his eye.

"I had 45 years of showjumping and won my first major championship in 1956, when most people were not even a twinkle in their parents' eyes.

"This is conquering England, but I conquered the world in [showjumping].

"I was chatting to another trainer the other day and his father always said there's two chairs that will kill you - the electric chair and the armchair."

Pressed again on the new fences, the flat-capped pensioner offered this blunt response: "I say rubbish to all them doubters. This country is too full of wimps."

Winning jockey Ryan Mania, riding in the National for the first time, had an interesting story to tell, having returned to racing after quitting the sport for six months in the winter of 2011.

The 23-year-old spoke after his Aintree win about his decision to quit racing through frustration at the lack of rides as cold weather caused postponements.

"It was a hard decision but I was unsure what to do and wanted to clear my head and figure out my next move," he said.

"It was a sabbatical and I thought I'd take a whole year out, but I missed racing after six months."

Mania was new to the race but not to the course, having finished second on the Smith-trained Gansey behind Little Josh in the Grand Sefton Chase over the National fences in December.

Little Josh was put down at the Aintree meeting on Friday after a fall in the Topham Chase, demonstrating that jump racing can never be risk-free.

However, this was a day where the popular elements of the world-famous steeplechase, which attracts an estimated global audience of 500 million, could be enjoyed by the audience.

A dangerous element remains, although there are already people out there complaining that it is not as exciting if there are fewer fallers.

Mania had few complaints, although of his plans to celebrate, he said: "I'll be going to bed early - I'm riding at Hexham on Sunday."

A local connection to the Merseyside track also emerged in the shape of the winner's part-owner Jim Beaumont, who was born in Liverpool and aged 14 was a bell boy at the city's Adelphi Hotel.

"I was employed by the porter and not by the hotel, so I used to make a lot of money for the hall porter and can remember the Grand National winners coming up the hotel steps," said Beaumont.

This time, he was a National winner - along with fellow owners Douglas Pryde and David van der Hoeven. The latter was holidaying in Greece as he became an Aintree victor, his first ever win as a racehorse owner.

They only bought Auroras Encore, who was a narrow Scottish National runner-up at Ayr a year ago on his favoured good ground, in December.

An injury-free Grand National, with a long-priced winner and interesting back story. Not quite two fingers to the critics, but a sign the race has a brighter future.