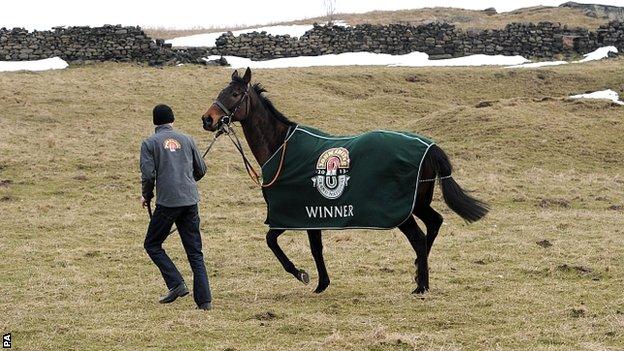 Grand National winner Auroras Encore may run in the Scottish National on 20 April, according to Harvey Smith, whose wife Sue is the horse's trainer.

The former British show jumping champion said: "If he comes out of the race and says 'come on now', we'll have a run around Scotland as well."

His wife added: "One of the owners did mention the Scottish and Harvey might agree with them but I'm in the middle."

Ridden by Scotsman Ryan Mania, 11-year-old Auroras Encore was a surprise 66-1 winner of the famous race at Aintree on Saturday.

The horse entered the Scottish National last year and finished second, narrowly losing out by a neck to Merigo.

Two other horses, Earth Summit and Little Polveir, have won both Nationals in separate years.

Part-owner Jim Beaumont said: "We would like to go for the Scottish National, if Sue says we can."

Auroras Encore is the first Yorkshire-trained winner of the Grand National since Gerry Scott's Merryman II, trained by Neville Crump, triumphed in 1960.

Welcoming the media to her yard at Craiglands Farm in Bingley, West Yorkshire, Smith said: "We're past the stage of partying all night, so we made sure we got to bed!

"The horse has come out unbelievably well this morning. His legs are sound and he's quite chirpy considering he raced for nearly four-and-a-half miles."

While the victory is likely to increase the profile of Smith's yard, she has no plans to expand what is already a successful operation.

"Nothing will change here, I wouldn't have thought," the trainer said.

"We want to train a certain amount of horses, but with more quality. We've got about 40 in training at the moment."