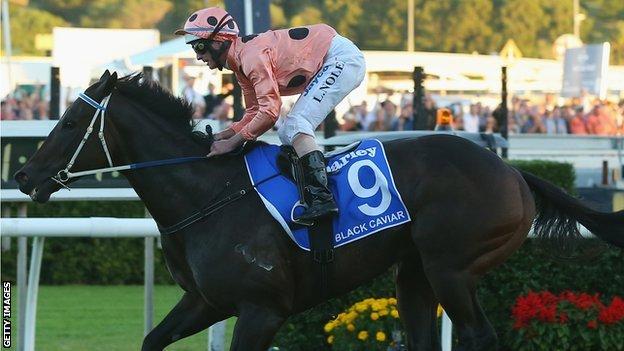 Unbeaten sprinter Black Caviar made it 25 consecutive wins with victory in the one million Australian dollar (£684,490) TJ Smith Stakes in Sydney.

It means the six-year-old has set an Australian record of 15 Group One wins, moving clear of Kingston Town.

After trailing Rain Affair at Royal Randwick, jockey Luke Nolen switched wide at the top of the straight and the 1-7 favourite pulled clear.

It is also an Australian record eighth successive Group One triumph.

Trainer Peter Moody was full of praise for his horse, who won the Diamond Jubilee Stakes at last year's Royal Ascot, but also paid tribute to Kingston Town's achievements.

"I'm extremely proud of her holding that record but he's to be enjoyed for what he was, and her in her own right also. It's just tremendous," said Moody.

"It was a lovely ride by Luke. It was always our plan to come out and be six or seven deep in the straight as we thought the inside was a bit inferior and even though she is probably good enough to overcome it, we didn't need to try it.

"She's a mighty mare. Horses look fast until they line up against her."

Moody has not ruled out another trip to Royal Ascot for the superstar horse but said the team would take their time deciding on future plans.

"We'll get her home and have a chat with the team and see where we go from there," he said.