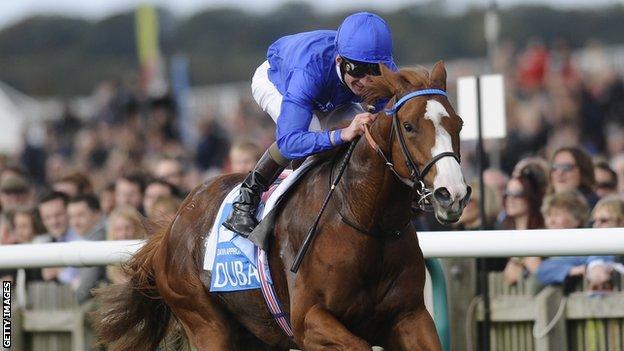 Flat racing will turn to Dawn Approach this season to fill the void left by , says Newmarket chief Michael Prosser.

Attention will focus on the three-year-old who has won all of his six races, after the retirement of Newmarket-trained Frankel.

No bubbles have been burst - every horse is a potential Pegasus

"This game is all about aspiration," Prosser told BBC Radio Cambridgeshire.

Godolphin-owned Dawn Approach, trained in Ireland by Jim Bolger, will be primed for the one-mile 2,000 Guineas, the first classic of the year, in three weeks' time.

"He's already rated over 120, he is unbeaten and let's hope he delivers," added Prosser, who is regional head of racing at Newmarket.

"But Frankel was unique. It is great to have superstars and we're very happy to have

Six out of six for Dawn Approach

"To find another Frankel, who has now got a rating in excess of Dancing Brave, is very, very hard to do."

Newmarket will kick-off its season on Wednesday with the Craven Meeting after a bitter winter that will not only have affected the track, but the preparations of trainers.

"It's been very frustrating for trainers," continued Prosser.

"There's been very little growth and it's been hard to get on to green gallops.

"I suspect a few trainers are behind where they would like to be with their horses. But I think the season will hot up in earnest as we build up to the Craven.

"No bubbles have been burst - every horse is a potential Pegasus."