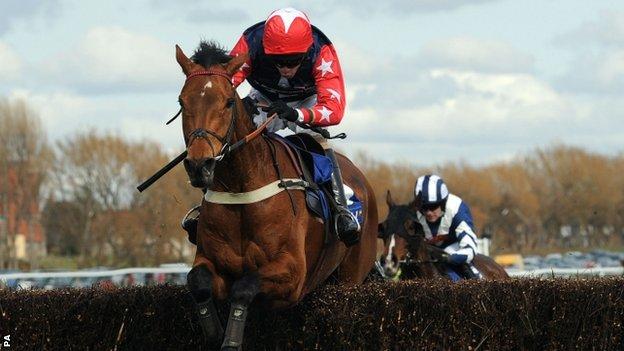 Godsmejudge (12-1) became the youngest horse since 2001 to win the Scottish Grand National, sealing victory at Ayr by four lengths.

The 2013 Grand National winner Auroras Encore, ridden by Ryan Mania, was pulled up.

"He was fantastic, he got into a great rhythm," said Hutchinson of Godsmejudge.

"He didn't enjoy the hustle and bustle early on, but found his gear and gave me a fantastic ride.

"All credit to the boss, the horses have been in fantastic form and I've been lucky enough to sit on them."

Scottish-born trainer King said: "I'm very proud. I think this means as much as any of the wins I've had. I'm speechless.

"I know the area very well and it's like coming home."

Auroras Encore was bidding to become just the second horse after Red Rum in 1974 to win the Grand National and Scottish Grand National double in the same year.

But, despite closing in on the leaders mid-race, Mania was unable to ride him into contention, while favourite Rival Destruval (8-1) was pulled up with 11 fences to jump.