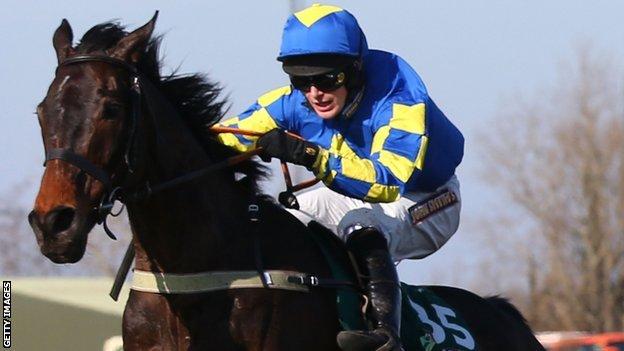 I say 'history' because it's 39 years since a horse last won both races in the same year - and that was the mighty Red Rum.

So great was the achievement that Ayr racecourse erected a statue in his honour and if you're at Ayr on Saturday, take a look at it just beside the paddock.

In a brave move that could cost them thousands of pounds, the owners of Ayr have promised to commission a statue of Auroras Encore if he can pull off the double.

And wouldn't it be wonderful for Galashiels-born jockey Ryan Mania who was thrust into the forefront of nationwide publicity after he was airlifted to hospital the day after the Grand National following a bad fall at Hexham.

He's recovered enough to be fit to ride Auroras Encore and you can imagine the celebrations in the Borders if he wins.

But what of the main rivals? Among them will be the likely favourite, Rival D'Estruval, owned by Scotsman, Raymond Anderson Green, who won the race last year and in 2010 with Merigo.

Rival D'Estruval was looking all over the winner of a big race at the Cheltenham Festival last month until he fell two fences from home and bookmakers reckon he's the one to beat.

This is a race that Scottish trainer, Lucinda Russell, has come close to winning before and she has two runners - Silver By Nature and Nuts N Bolts.

Silver By Nature is owned by the former St Johnstone chairman, Geoff Brown, while Nuts N Bolts is expected to run well too.

Donald McCain, whose father Ginger trained Red Rum, has a couple of runners in Our Mick and Lively Baron.

And watch out for the runners from Venetia Williams' stable - Rigadin De Beauchene, Relax and Pentiffic.

A crowd of around 17,000 is expected but will they witness a piece of Scottish racing history? We'll know around 16:00 BST in what promises to be a race to remember.