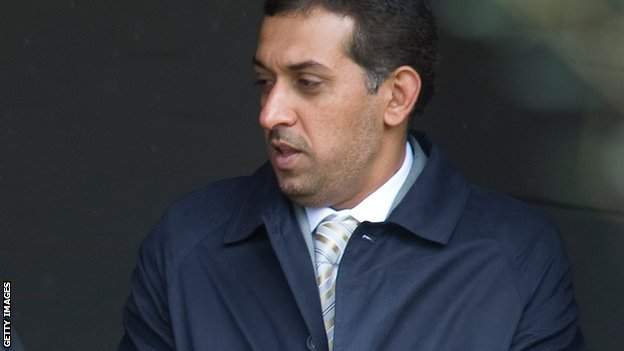 Godolphin trainer Mahmood Al Zarooni has been charged after tests found traces of anabolic steroids in 11 of his horses.

Eyebrows are being raised at the speed of all this.

It often takes weeks for charges of this type being made by the British Horseracing Authority to the case being heard by a disciplinary panel, yet with Al Zarooni, it will take little more than 24 hours.

Critics are sure to seize on the whole timescale, asking if the BHA is opening itself to accusations that the matter is being swept away to save further embarrassment for Sheikh Mohammed, one of British racing's biggest benefactors.

The big question: can such an important matter, seen as the biggest drugs scandal for racing in modern times, really have been satisfactorily investigated when the process is so fast?

On Monday, the trainer admitted making "a catastrophic mistake".

According to the BHA he has admitted giving anabolic steroids to four other horses, but further doping charges cannot be brought as these animals were not tested.

Al Zarooni could lose his training licence in what has been described as one of the biggest doping scandals in British racing history.

Godolphin is overseen by the monarch of Dubai, Sheikh Mohammed, who appointed Al Zarooni, a former stable groom, three years ago. He is one of the group's two British-based trainers, the other being Saeed bin Suroor.

Simon Crisford, the racing manger for Godolphin, said in a statement on Monday that they were to urgently review all procedures and controls.

"His Highness Sheikh Mohammed was absolutely appalled when he was told and this is completely unacceptable to him," he added.

The BHA said that on 9 April this year samples were obtained from 45 horses trained by Al Zarooni at Moulton Paddocks Stables in Newmarket.

Subsequent analysis revealed 11 of the samples contained ethylestrenol and stanozolol, which are prohibited substances.

The 11 horses, who together have won more than $2m (£1.31m) in prize money, include unbeaten Certify. They have been suspended from racing for an indefinite period.

According to the BHA, Al Zarooni has told the investigators that in addition to the 11, Comitas, Sashiko, Vacationer and Tearless were also given one of the banned substances.

While doping charges cannot be brought, Al Zarooni is accused of rule breaches relating to medical records and his conduct for these incidents.

The BHA also disclosed details of its drug-testing procedures and revealed there had only been one other case of anabolic steroids found in a tested horse "in recent years". This resulted in trainer Howard Johnson receiving a in 2011.

"The use of anabolic steroids is prohibited at all times for any horse registered as 'in training' under the care of a trainer licensed by the BHA," it said.

Around 700 tests were carried out during training in 2012, although the BHA did not disclose any details about the number of positive tests.

The National Trainers' Federation (NTF) said on Tuesday it was shocked at the doping scandal, though chief executive Rupert Arnold added that it was not symbolic of a wider culture of doping within the sport.