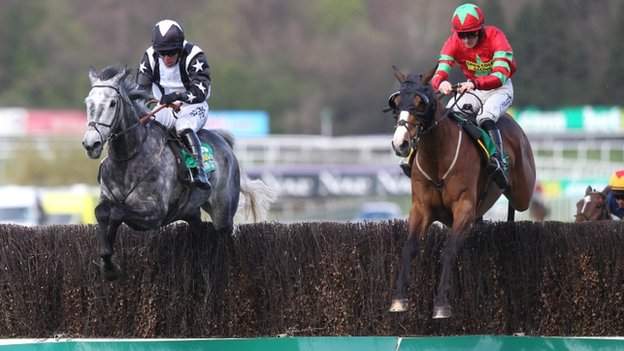 The 14-1 chance Quentin Collonges landed the last big race of the 2012-13 jumps season with victory in the Bet365 Gold Cup at Sandown.

Andrew Tinkler's mount edged out Same Difference and Sam Twiston-Davies in a driving finish to the line.

The pair had pulled away from the rest of the field and jumped the last together.

The 9-2 favourite Away We Go looked dangerous but a mistake at the second last left him back in third.

Trainer Henry Daly admitted afterwards that he had planned to go to Ayr for last weekend's Scottish National only for the heavy ground to rule out that idea.

"He's not big enough to jump the fences when it's soft so he's had a light campaign," he said.

"Briery Fox led over the last here and got beat (in 2009) so it's a very nice end of season race to win.

"I'd imagine he'll go for good staying chases next year, but he's so small that the National fences would seem very big for him.

"It's something we'll have to think about."

Tinkler, who rides regularly for Nicky Henderson - crowned champion trainer for the first time since 1987 on Saturday - was delighted to have landed the win for Daly.

"It's great that on a day Nicky Henderson is crowned champion trainer, another of the trainers I ride for has won a big race," he said.

"He stays so well but it's his attitude that helps him to stay, he's so tough."

Henderson landed the title ahead of Paul Nicholls thanks to performances from the likes of Sprinter Sacre, who won at Cheltenham, Aintree and Punchestown, Arkle winner Simonsig, Gold Cup victor Bobs Worth, dual King George hero Long Run and youngsters like My Tent Or Yours and Captain Conan.

Tony McCoy was presented with his 18th consecutive jockeys' title while Lucy Alexander became the first female to land the conditional jumps title.

Meanwhile, Willie Mullins took his tally of wins at this week's Punchestown Festival to 13, helped by victories in the meeting's final two Grade One races.

Both races showed the strength in depth in his stable as Ruby Walsh rode the disappointing Tarla in Glens Melody's race while the first four home in the juvenile heat were from his County Carlow yard.