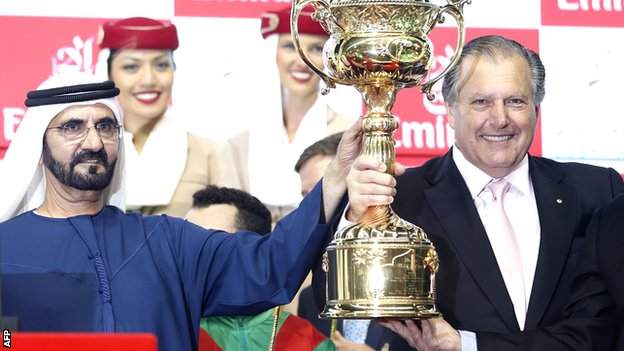 "Sheikh Mohammed has been by far and away the most significant investor to British racing but, as regulator, we treat everyone equally," said Bittar.

"We'll be doing everything we can to encourage him to stay involved."

Godolphin is one of the world's leading racing operations, led by the ruler of Dubai, Sheikh Mohammed bin Rashid Al Maktoum.

The BHA bans any use of anabolic steroids but the substances are permitted out of competition in countries including Dubai and Australia - a fact Al Zarooni used in his defence when he appeared at a BHA inquiry.

"Britain has zero tolerance on anabolic steroids, that is absolutely the right position, and we'll be doing everything we can to advocate that other jurisdictions fall into line with our rules," Bittar said.

"At the moment, trainers coming into this country with runners do have to sign a declaration that the horses have not been given a range of substances and anabolic steroids is on that list, but I think most trainers think that's not really good enough and it needs to be tightened up," he said.

"I would certainly like to see rules brought in to ensure that any horse competing in this country from abroad has not been given anabolic steroids and is therefore not racing under the effects of those steroids, even if they test clear on race day."

Bittar said there was no reason to punish Sheikh Mohammed, whose operation has won more than 200 top-level Group One races in 12 different countries since its formation in 1992, as well as Al Zarooni.

He told BBC Radio 5 live's Sportsweek: "The primary responsibility for care of the horses sits with the licensed trainer under the rules of racing, not the owner.

"As far as Godolphin goes, they are the biggest owners in the world, they have 450-odd horses and probably employ 300-plus staff at Newmarket alone so their investment in British racing is vast and Sheikh Mohammed has been a huge benefactor over the past two decades, hugely important to the sport.

"I'm not worried about upsetting him but I'd love to ensure he remained as keen to be involved, invest and to get enjoyment out of British racing as he had and I'm sure right now he's not enjoying it as much as he normally might do."

Meanwhile, Bittar admitted that changes may be made to when horses are tested after criticism that only one in 28 are checked out of competition.

"It's about one tenth of the total number of drug tests that we do," he said.

"We'll look at our policy and determine if we need to do more. There's probably an argument that this case highlights the need for us to shift the balance a little bit, whether that balance is exactly right is certainly a point we'll be discussing with the board.

"The trainers collectively have been one of the fiercest critics and demanding reductions in the BHA's budget.

"If you're a stakeholder you can't have it both ways, you can't demand cost cutting yet demand to have the highest proportion of drugs tests taken in world racing.

"If the economics were no object, obviously we would do more but in all of the jurisdictions I've worked in, Britain has the most efficient allocation of its testing because British racing has by far and away the best intelligence system of any I've seen.

"While other jurisdictions do more sampling, proportionally, I wouldn't argue they were necessarily more efficient."