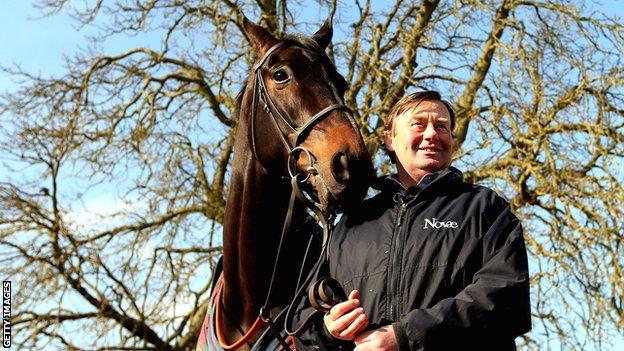 Nicky Henderson has vowed to come back even stronger next season after being crowned champion jumps trainer for the first time since 1987.

Among the highlights for the Lambourn trainer was winning the Gold Cup.

"You've got to keep going," he told BBC Berkshire. "I love it. When you have horses like Sprinter Sacre, Bobs Worth and Long Run you are going to get up every morning to look at them."

Henderson's success in 2012/13, which will forever be remembered for the total dominance of his stable star Sprinter Sacre who went 10 races unbeaten and won the Queen Mother Chase, has surprised even him.

But he is expecting Nicholls to come back firing next season.

Cheltenham went our way as did Aintree and it's nice to do it. I would think it would only make Paul more determined and very competitive next year.

"It's a bit like the comeback kid," he said.

"It's not something anyone would have expected.

"Luckily the horses have been good and it's been a fantastic year.

"Yes, that's part of the fun (rivalry with Paul Nicholls). I won't enjoy it on Monday and the clock goes back to nought. But we won't be looking over our shoulder again until Cheltenham because it's pointless and you just need to get on with it and do your best.

"It's been a long battle. It's been brewing up until Cheltenham.

"Cheltenham went our way as did Aintree and it's nice to do it. I would think it would only make Paul more determined and very competitive next year."

Henderson added there have been some memorable moments in what has been a tough year because of the weather.

And he says Tuesday's Champions Chase at Punchestown in Ireland will live long in the memory.

"It's been the wettest winter I think we've had and we're down on winners but up on prize money, purely because you couldn't run horses in the winter," he said.

"It really was difficult. Sadly only Bobs Worth ran twice. Sprinter Sacre only looked like running three times and then I decided to throw him in at Aintree and then run him in Ireland. It hasn't been an easy winter.

"I couldn't let the year go past without mentioning Darlan (who suffered a fatal fall at Doncaster).

"I seriously think he was a champion hurdle horse of the highest quality and we lost him and plenty of others didn't live up to expectation.

"But you cannot expect all the horses to do everything all the time and that is why you need big squads of good horses and that's what we've got."

And when asked what his highlight of the year was, Henderson added: "Ireland on Tuesday when we took Sprinter Sacre over there.

"I don't think anybody has seen scenes like that, I never have, I took him over there as I felt he deserved to be seen in Ireland.

"The reception and everything that happened over there on Tuesday was quite memorable. I will never forget it."