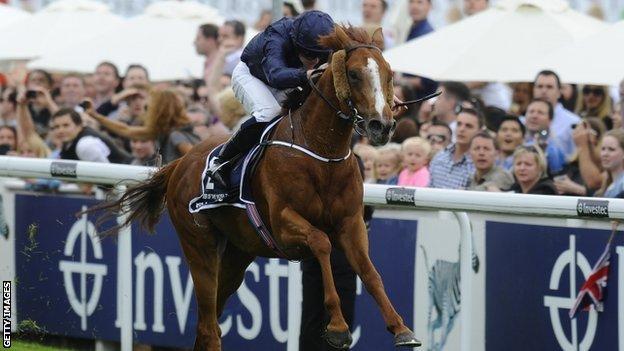 Ruler Of The World won the Epsom Derby to give trainer Aidan O'Brien his fourth success in the race.

Favourite Dawn Approach never settled and despite taking the lead up the hill he faded badly and finished last of the 12-strong field.

"He was unbeaten coming here and is a great horse," said a delighted O'Brien of the winner.

"We are so lucky to be in the position that we are in, to get such horses and then to work with such a team of people."

Ruler Of The World came into the race after only two previous runs - a comfortable victory in the Chester Vase last month and a maiden win at the Curragh.

But his lack of racecourse experience did not show as he picked up the pace smartly to race clear of the field and give Moore a second win in the Classic after Workforce's success in 2010.

His stablemate Battle of Marengo, Galileo Rock and Ocovango all chased strongly but it was the Elaine Burke-trained Libertarian, under William Buick, who put in a late run to close with every stride and finish second.

Dawn Approach, who was running over the mile-and-a-half distance for the first time, struggled with the lack of pace early on and jockey Kevin Manning brought him to the front.

But he struggled for stamina and was beaten a long way from home.

Moore, who had also partnered Ruler Of The World in his Chester success, said the three-year-old had improved from his performance around the Roodee.

"I wanted to be a bit closer, but I just didn't get away very well and it was a very messy race," said the former champion jockey.

"I had no option but to go on when I did. I knew he'd stay the trip very well but I got there a bit soon and he was very green. He'll get further. He's got a really likeable attitude.

"I knew the others were coming because I'd gone too early, but he really toughed it out and showed a very good attitude.

"I'm very lucky to be in this position and on these horses. This is the most important race for me."

Dawn Approach's trainer Jim Bolger, who saddled New Approach to victory under Manning in 2008, said: "Kevin said he jumped out all right and was OK for about 10 strides.

"But he grabbed hold of the bridle, and from then on he was more or less out of control.

"He'd been running over a mile, where they'd been jumping out and going a good pace and Kevin could just let him bowl.

"I doubt he'll be running over a mile and a half again."