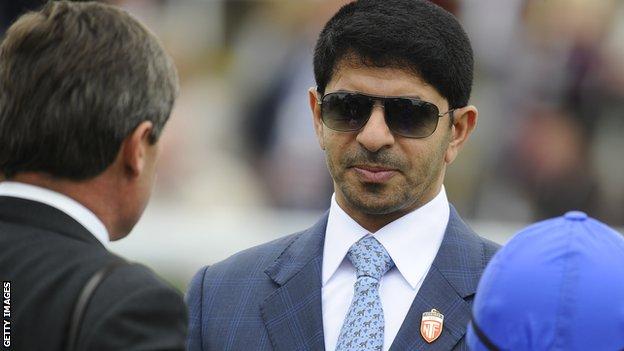 Air of Glory won at Lingfield to mark a successful return to racing for Godolphin's Moulton Paddocks, the Newmarket stable's first entry since the Mahmood Al Zarooni scandal broke.

Q&A - Inside track on doping scandal

But Al Zarooni's ex-assistant Charlie Appleby has been tipped to take over.

Godolphin is run by the ruler of Dubai, Sheikh Mohammed bin Rashid Al Maktoum, who temporarily 'locked down' the stable in light of Al Zarooni's offences.

Another seven dopings came to light, resulting in the British Horseracing Authority suspending 22 horses formerly trained by the 37-year-old from racing for six months.

But the yard, under Bin Suroor's guidance, registered an instant success upon its return to action, with debutant Air of Glory winning Tuesday's Lingfield Park Maiden Stakes by three-quarters of a length, taking Godolphin's tally of victories for the season to 50.

Bin Suroor, who runs Godolphin's Snailwell Road stables, now has almost 400 horses in his care since taking over at Moulton Paddocks on Tuesday.

Sheikh Mohammed is expecting to relieve the strain on Bin Suroor by appointing a replacement, which could be Appleby, who has started a training course to qualify for his BHA training licence.

Godolphin manager Simon Crisford told the Telegraph: "It's impossible for Saeed to train so many, so Sheikh Mohammed would like Charlie Appleby to step in while he considers what arrangements he makes long-term."