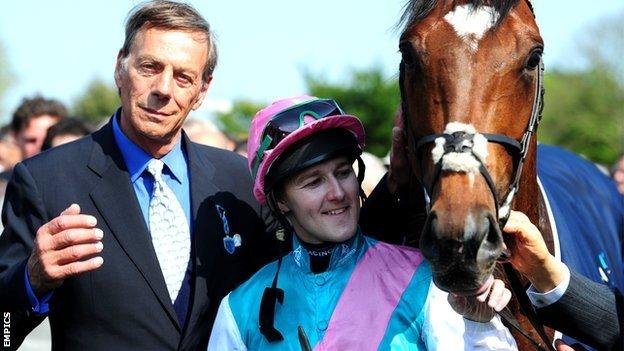 Sir Henry Cecil, 10-time champion Flat trainer, has died at the age of 70.

Responsible for 25 British Classic winners, Scottish-born Cecil was also the leading handler at Royal Ascot with a record 75 successes.

Cecil, who was knighted in 2011, battled cancer in his later years.

Towards the end of his career, the Newmarket-based Cecil trained Frankel, officially the highest-ever rated racehorse after finishing his career unbeaten in 14 starts.

Cecil was described as "the greatest trainer of all time" by racing broadcaster Derek Thompson, champion National Hunt trainer Paul Nicholls called him "a true legend", while Newmarket racecourse said his contribution to racing would never be forgotten.

"He had a great sense of humour. He was a super intelligent guy and really knew how to place his horses," the 53-year-old said.

"He tried to have fun. The atmosphere during most of the time I was up at Warren Place was just fantastic."

Jockeys at all four meetings in the United Kingdom on Tuesday were wearing black armbands as a mark of respect following the death of Cecil.

A minute's silence was also arranged at the fixtures - at Worcester, Fontwell, Lingfield and Salisbury.

"It is with great sadness that Warren Place Stables confirms the passing of Sir Henry Cecil earlier this morning," said a statement posted on Cecil's website.

"Following communication with the British Horseracing Authority, a temporary licence will be allocated to Lady Cecil.

"No further update is anticipated this afternoon."

"He was one of the most loved people in the sport, over a long time," he said.

"You go back nearly four decades to his first Classic winner, right through to a very fortunate ending, in a way, being able to train the greatest horse any of us will ever get to see [Frankel].

"I am genuinely very sad, it is a tragic day for the sport."

Cecil first took out a training licence in 1969.

He had his first British Classic win with Bolkonski in the 1975 renewal of the 2000 Guineas at Newmarket, following up in the same race a year later with Wollow.

Both horses were ridden by Frankie Dettori's father, Gianfranco.

Among his Leger winners was Oh So Sharp, who completed the fillies' Triple Crown of 1000 Guineas, Oaks and Leger under Cauthen.

Indian Skimmer, probably the best filly Cecil ever trained, won the Prix de Diane in 1987, the English and Irish Champion Stakes the following year and was third in the Breeders' Cup Turf.

But for all the great horses to pass through his care, the best was saved until last in Frankel, who retired to stud after crowning his unbeaten career with victory in the Champion Stakes at Ascot in October 2012.

He is survived by two children from his first marriage, Katie and Noel, and son Jake from his second marriage.

Six years ago, Henry Cecil revealed he had been having treatment for the disease.

Racing in particular, but sport generally, is grieving a genuinely great man.

Colourful both in terms of personality and dress, he hit the heights as a trainer, but also the depths when the number of horses under his care dwindled to the point of prompting retirement talk.

But, despite the onset of cancer, Cecil determined to return, and many of us wept unashamedly when success in the 2007 Oaks with Light Shift brought him back to the big-time. And then came Frankel.

No racing figure was better at what he did or better-loved while he did it. Next week's Royal Ascot won't feel the same.

Cauthen, who won the Derby for Cecil on Slip Anchor in 1985, was among those to mourn his death.

"He had a great manner, he didn't miss a beat and his attention to detail was paramount," said Cauthen.

"I was fortunate to ride for a lot of great trainers but there was nobody above him."

Racing presenter Clare Balding paid her respects to Cecil, tweeting: "He was one of the true greats and a gentleman. Frankel his crowning glory."

"He was just a genius of a racehorse trainer. This is a very, very sad day for racing. We will always miss him - he will never be replaced," added Carson.

David Lanigan, who was Cecil's assistant for a number of years before setting up on his own, said: "Words would not describe what a great friend & boss HRAC was. Our deepest sympathies to the Cecil family. R.I.P Govnor."

Irish flat jockey Johnny Murtagh commented on Twitter that he was "privileged to have ridden" for the trainer.