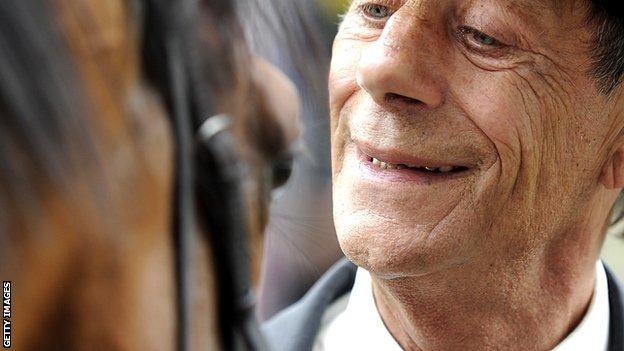 There is a heartwarming picture of the legendary trainer Sir Henry Cecil looking into the eyes of his champion racehorse Frankel. It is a look of love.

Cecil loved horses, racing, and the people who followed the sport. And they loved him back.

That is why to those who followed an extraordinary career, his death aged 70 after fighting stomach cancer feels almost like the loss of a family member.

Ten champion trainer titles, 75 Royal Ascot wins and four victories in the Derby at Epsom tell only a small part of the story.

The 70-year-old slumped from training king to also-ran, and bounced back again.

During a terrible few years he went through a divorce from his second wife, the death of his alcoholic twin brother David, drink-driving ban and a fall from the top of the training perch.

In February 2007, Cecil revealed a cancer battle which he quietly fought over six years and somehow pushed to one side while resurrecting his career with high-class horses such as Twice Over and Midday.

"With the death of my brother, financial things, divorces, I never thought that was the end of me. I just thought I can't be an also-ran," he said in a BBC interview in 2011.

"I don't want to be that pathetic. When I hear people on Newmarket Heath saying 'There's Henry Cecil, he should have retired years ago', those sort of things hurt me."

Like many a champion, Cecil was galvanised by the doubters and then along came Frankel, named after the famed US trainer Bobby Frankel, and he had an equine partner with which to forge new successes.

Perhaps Cecil knew this was to be his last, and greatest, partnership and he carefully nurtured the colt, resisting the temptation of going for the helter-skelter stamina test of the Derby after a whirlwind win in the 2,000 Guineas.

Fourteen consecutive wins followed for his loyal owner Prince Khalid Abdulla and Irish jockey Tom Queally before the horse officially rated the world's greatest was retired to stud in October 2012.

Frankel was the horse of a lifetime, and may well have helped prolong Cecil's own life. The wonder horse gave him another reason to live.

In Flat racing where millions revolve around breeding careers and some trainers can appear aloof, Cecil took time to sign autographs and chat to curious racegoers.

At first glance an apparent aristocrat, yet with a feeling towards the 'ordinary' public, he was awarded a knighthood almost exactly two years ago in the Queen's Birthday Honours List - tribute to a man as quirky as some of the animals he trained.

"He's a lovely man, a people's man. He has an important job and could be as up in the clouds as he wants to be, but he's very approachable, very understanding," said Frankel's jockey Queally on hearing of his knighthood.

"If there's anything on my mind, or a weight on my shoulders, I wouldn't think twice about going to him."

Cecil, whose father died in the war, aged 28, before he was born, did not hail from a racing background.

His mother lived on a farm eight miles from Newmarket, and it was her marriage to trainer Sir Cecil Boyd-Rochfort that introduced Henry to the sport.

He assisted his stepfather, who trained horses for the Queen, before taking out a licence himself in 1969 and going on to be the leading trainer of his generation.

Cecil's roll call of winners at the highest level in Group One races reads like a who's who of equine champions.

Racing in particular, but sport generally, is grieving a genuinely great man.

Colourful both in terms of personality and dress, he hit the heights as a trainer, but also the depths when the number of horses under his care dwindled to the point of prompting retirement talk.

But, despite the onset of cancer, Cecil determined to return, and many of us wept unashamedly when success in the 2007 Oaks with Light Shift brought him back to the big-time. And then came Frankel.

No racing figure was better at what he did or better-loved while he did it. Next week's Royal Ascot won't feel the same.

Ardross, Bosra Sham, Commander In Chief, Diminuendo, Light Shift, Love Divine, Oath, Oh So Sharp, Reference Point, Slip Anchor and Wince are among the horses that have ensured the flag, which was raised after every Group One win, fluttered regularly at Cecil's Warren Place yard in Newmarket.

Oh So Sharp was the last filly to win the Triple Crown, claiming a hat-trick of Classics in the 1,000 Guineas, Oaks and St Leger of 1985.

Cecil particularly excelled with the female of the species, and admitted he had a feminine side.

"I'm very vain. I think I should have been born with female hormones. I love shopping," said the trainer, who listed an afternoon trip to the top shops of Knightsbridge and Chelsea as part of an ideal day.

He tilted his head to one side while fielding questions from the media and had a habit of blinking when thinking about his answers, or posing a question himself.

Cecil confessed to liking horses with big ears, had an impressive collection of toy soldiers and in his battle with cancer concentrated on the positives - "good things like ice cream, theatre and roses".

While racing is a sport pored over by statistics buffs, examining times, distances and going, Cecil preferred to rely on instinct rather than stopwatches.

There was an almost childlike enthusiasm the trainer had for racking up victories, and he admitted that he "likes beating people".

Cecil enjoyed drawing up an empty crossword at the beginning of each season and coloured in one box for each winner he had.

Frankel gave him plenty of colouring in to do, and added a final, glorious dash of colour to a rollercoaster career.

"Henry's re-emergence as a trainer is not just one of the greatest stories in sport, but one of the all-time great stories generally," said Teddy Grimthorpe, racing manager to Khalid Abdulla.

When news of his death was announced on Tuesday, many journalists were attending a British Horseracing Authority briefing in London on the sport's economic impact.

Several were close to tears as they remembered the impact of a flawed, quirky, self-effacing genius.

People in racing apply the term 'genuine' to the best racehorses. It could easily apply to one of its truly great trainers.