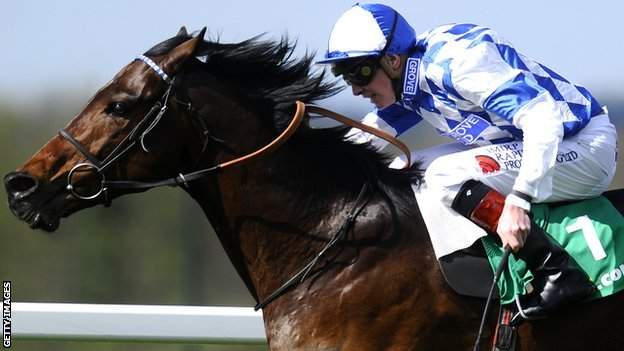 The emergence of Al Kazeem, and of his jockey James Doyle, into Flat racing's big time in 2013 has been one of the season's main delights.

On the one hand, we have witnessed a horse, long highly regarded, but unable to truly demonstrate his ability because of injury, showing just what high grade talent and courage he's made of.

On the other, we have seen a rider who's hardly a youngster at 25, but is finally getting the recognition of being a "grown-up jockey", rather later than he deserved.

And for all involved with Al Kazeem, the upward trajectory that makes the horse the stand-out for this year's Coral-Eclipse Stakes at Sandown shows no sign of slowing.

After that, October's Prix de l'Arc de Triomphe - "in my opinion, the best race in the world", declared Roger Charlton, trainer of the five-year-old - is on the cards.

Bred by his owner David Deer at Oakgrove Stud, adjacent to the racecourse at Chepstow, south east Wales, the horse showed plenty of potential as a two-year-old.

A year later, and five races produced a taking, led-all-the-way win in a valuable handicap prize at Newbury and four runners-up spots in good quality races, but Charlton was convinced better was to come.

That belief looked sure to be confirmed in the spring of 2012 when the son of prolific stallion Dubawi saw off Grade/Group One-winning opponents in the Jockey Club Stakes at Newmarket.

But within weeks, a fractured pelvis was discovered, and although the prognosis was a 100% recovery, the patience of Deer and the Charlton team, based at the historic Beckhampton stables in Wiltshire, was set to be tested.

The wait, however, has been worth it.

That promise has been fulfilled quite magnificently with three wins from three starts, two of them at the sport's highest, Group One level, and with the much-touted Camelot in arrears.

"He's a very special horse," Charlton told me after the latest success in the hugely-prestigious Prince of Wales' Stakes at Royal Ascot.

"He's a very, very good-looking horse who's got a lovely Dubawi head.

"He has all the attributes that make a good horse: a fantastic temperament, he's fantastically sound- apart from the pelvis- and a real trier."

Since starting out in 1990, Charlton, 63, has had many good horses through his hands, including, in a dreamy first season, two Derby winners - Quest For Fame (Epsom) and Sanglamore (French).

Al Kazeem could well end up being his best yet, and in these days where money associated with even bigger racing outfits talks, the trainer acknowledges his own good fortune.

He said: "The owner/breeder was offered lots of money for this horse, and in a lot of cases people accept those offers, and so I feel I'm lucky to have the horse really."

That such a top-notcher is not running for one of Flat racing's "usual suspects" when it comes to the big players, plus the fact that the guy on board is no household name, has unquestionably added to Al Kazeem's growing attraction.

All being well at Sandown, where the sponsor has him miles clear in the betting, that allure will then surely grow into something of a frenzy as the march towards Paris as the main British challenger for the Arc gathers speed.