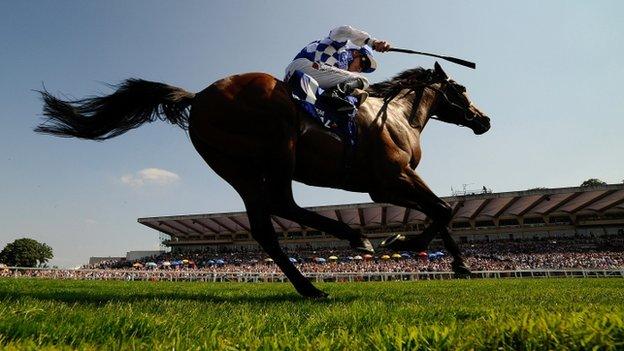 Al Kazeem won the Coral-Eclipse at Sandown to seal a Group One hat-trick although long-time leader Mukhadram was hampered in the latter stages.

The 15-8 favourite, ridden by James Doyle for trainer Roger Charlton, followed up successes at the Curragh and Royal Ascot.

Paul Hanagan on Mukhadram, who was second to Al Kazeem at Ascot, was third behind runner-up Declaration of War.

"Al Kazeem is the outstanding British-trained star of the 2013 Flat racing season so far, and he shows no sign of easing off the gas.

"With huge respect to higher profile owning, training and riding teams, it's refreshing - and healthy - to see the sport's greatest heights being scaled by some different names.

"It looks like a break now for Al Kazeem before the build-up to October's Arc, and the horse, plus Messrs Deer, Charlton and Doyle, will sweep into Paris with all flags flying confidently."

The winner crossed Mukhadram's line but was ahead and won by two lengths.

After a short stewards' inquiry, the result stood, although Doyle was given a five-day ban for careless riding.

Charlton, who has nursed the five-year-old Al Kazeem back from a serious leg injury, is aiming the horse at the Prix de l'Arc de Triomphe at Longchamp in October, for which he is a best price of 8-1.

"I'm immensely proud of him and my jockey, and the owner-breeder," said the Wiltshire trainer, who won the Derby at Epsom with Quest For Fame in 1990.

He said Al Kazeem would be given a break and may not run for two months.

"It's not my decision but I'd be reluctant to keep him going for the King George [27 July, Ascot]. He's had three races on pretty firm ground and I think he deserves a break," said Charlton.

"Then we can decide whether it's the Juddmonte International [21 August, York] or the Irish Champion Stakes, but I would have thought the Irish Champion [7 September, Leopardstown] is better timing, and then yes it would be good to run in the Arc.

"I think the horse has shown he has terrific guts and bravery. He's progressed and I think he is a proper horse."