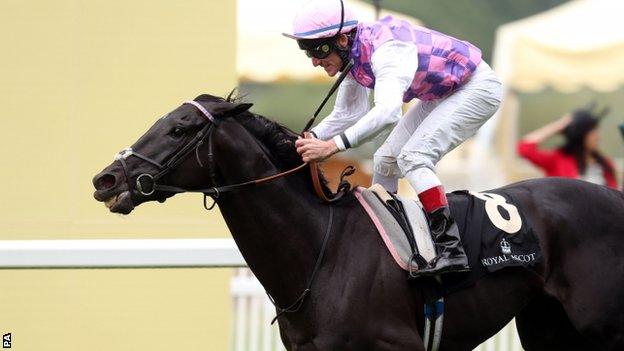 The belief that 2013 would see Johnny Murtagh regularly leaving his boots on their peg to spend more time with the race programme book have proved wide of the mark.

When granted a trainer's licence in May by the Irish authorities, eyebrows were raised at the practicalities of Murtagh's plans to combine his new role with continued race-riding.

It was said he wouldn't be as committed to other people's horses as to his own.

And anyway, continued the theory, at 43, the acknowledged world class master of his craft had reached veteran status so perhaps it was time for a change.

Those sceptics have, however, been sent packing.

First there was a fifth Royal Ascot jockeys' championship - defying pre-fixture odds of 33-1 - and then further Group One success in Ireland.

All of those big-race winners have been provided by 'outside' stables.

Now, on board one of them, the Edward Lynam-trained Sole Power, victorious in a breathless King's Stand Stakes at Ascot, Murtagh seeks to add another Group One trophy in Newmarket's July Cup.

"Eddie's been good and stuck by me," explained Murtagh. "Some people think you can't do it [riding and training]. They think that I might not be at my best.

"But I'm as good now as I ever was, and I'm still hungry to show those young guys that I'm up there with the best."

For more than 20 years Johnny Murtagh has been one of racing's biggest jockey names and greatest characters.

A long list of top-level success has been achieved on a global scale, which included three Epsom Derbies, four in Ireland and a Prix de l'Arc de Triomphe (all three races on Sinndar, 2000).

Along the way, the five-time Irish champion has been associated with some of flat racing's highest profile operations, notably those of the Aga Khan and of the Coolmore empire.

To add to his story, the one-time teenaged boxing ace has also been forced to fight off alcohol and weight-related demons.

However, those dark times feel a long way off now as Murtagh supervises a bustling string, formerly under the care of ex-jockey Tommy Carmody, at Pollardstown stables on The Curragh.

"I'm busier than I used to be and I can see things from the trainer's side of the fence, but I'm enjoying it," he said.

"There are no grey hairs yet, no stress, although I'm eating more breakfasts than I really should be. It's keeping me busy, it's keeping me active and mentally sharp.

"I want to be riding on the big days in Ascot and in the big meetings around the world. That's what I've done all my career and I hope I can do it for a while."

For his part, Sole Power, owned by members of the Power bookmaking family, has been both profitable and entertaining to follow.

Since becoming only the second 100-1 winner of a Group One prize when taking York's Nunthorpe Stakes in 2010, Sole Power has run 21 times, rarely letting down supporters.

Admittedly, all of the six-year-old gelding's wins have been at the minimum distance of five furlongs (1,000m) and the Newmarket feature is a furlong further.

But the horse seems more mature this year and is now ready to win outside his comfort zone.

The presence of highly-regarded Slade Power, also representing the Power family and Edward Lynam, only adds to the interest.

It's a big day, with top sprinters battling it out for their championship: just the sort of stage on which Johnny Murtagh has demonstrated he continues to revel.