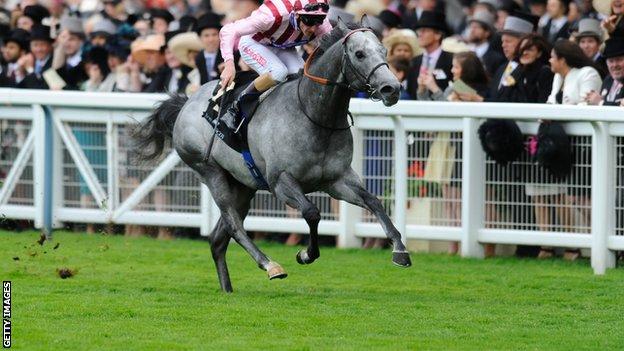 Lethal Force produced a dominant performance to claim a comfortable victory in the July Cup at Newmarket.

The Clive Cox-trained grey, who won the Diamond Jubilee Stakes at Royal Ascot last month, immediately took a prominent position from out of the stalls before charging to victory.

The four-year-old won by a length and a half ahead of Society Rock, while Slade Power was third.

"I'm so proud of him," Cox said of Lethal Force.

"Even when he won at Royal Ascot they said he was lucky and it was a good ride, but I think he's confirmed today he's pretty good. There might be a few doubters silenced now. I'm thrilled for everyone back home.

"He came back from Ascot really well and he was cherry-ripe today.

"Physically he has matured and strengthening from three to four has been the key. To break the track record is brilliant."