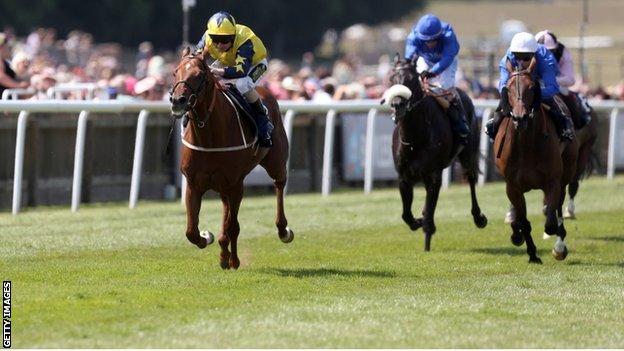 Joe Fanning on Universal led throughout to land the Princess of Wales's Stakes from Ahzeemah and Cavalryman.

Maputo won the big handicap under Graham Lee on day one of the meeting.

There were doubles for jockey Paul Hanagan, for owner Hamdan Al Maktoum, on Richard Hannon's Anjaal and Qawaasem for Charlie Hills, while Montiridge gave Hannon a second triumph.

Earlier, Feel Like Dancing took the opening Bahrain Trophy, with trainer John Gosden suggesting the Royal Ascot runner-up may be aimed at the St Leger.

All the latest racing results

After scoring on Universal, Johnston indicated his four-year-old colt could go for the £1m King George VI And Queen Elizabeth Stakes at Ascot on 27 July.

"He really does thrive on his racing. I didn't think he had a particularly hard race there and he is holding his condition very well, so the King George could be on the cards," said the Yorkshire-based Scot.

Former jump jockey Lee earned his 50th winner of the 2013 Flat season on the 8-1 chance Maputo and afterwards said his thoughts were with seriously injured rider Brian Toomey.

"My thoughts are with Brian Toomey. My admiration for the jumping lads has gone through the roof since doing this [switching to Flat racing]," said Lee, who won the 2004 Grand National on Amberleigh House.

Two-time champion jockey Hanagan swooped late on 14-1 shot Anjaal to snatch the July Stakes and was quoted at 33-1 by bookmakers for next year's 2000 Guineaas at Newmarket.