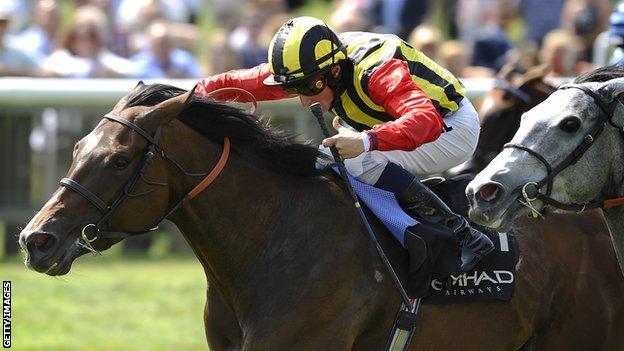 The 3-1 shot, trained by John Gosden, won by a neck although jockey William Buick was given a three-day ban for careless riding.

His mount veered off the rail into Sky Lantern, whose jockey Richard Hughes claiming Buick's whip struck his filly.

But the result stood to give Elusive Kate her third Group One triumph.

Giofra (5-1), who beat the winner into second last year, was aiming to become just the third back-to-back victor of the race.

However Alain de Royer-Dupre's five-year-old was third, with 25-1 outsider Purr Along, ridden by Frankie Dettori, last in the four-runner contest.

Sky Lantern was a comfortable winner of the Coronation Stakes at Royal Ascot in June.

But Richard Hannon's filly failed to replicate that form in a smaller field, with the pace fairly tentative throughout, to give Gosden his first winner of this race since Ryafan in 1997.