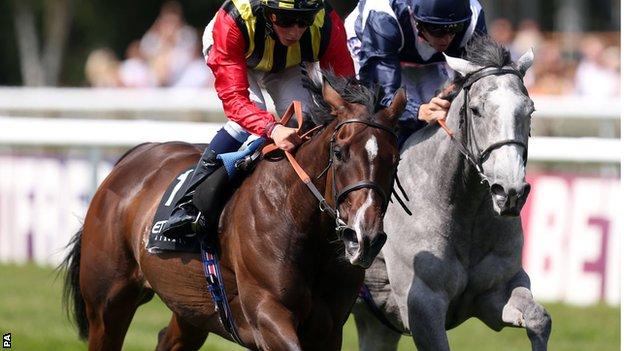 The British Horseracing Authority has dismissed an appeal into the outcome of Friday's Falmouth Stakes at Newmarket.

Richard Hannon's filly Sky Lantern was beaten by a neck by Elusive Kate.

They felt their horse was impeded by the winner but the result stood, despite jockey William Buick getting a three-day ban for careless riding.

"The disciplinary panel are satisfied Elusive Kate did not improve placing by virtue of interference, and the appeal has been dismissed," the BHA tweeted.

In the televised hearing in the stewards' room, Sky Lantern's jockey Richard Hughes had said: "It's a shame, as she's the one who has the bad habit (hanging) and I'm the sufferer."

Sky Lantern was a comfortable winner of the Coronation Stakes at Royal Ascot in June.